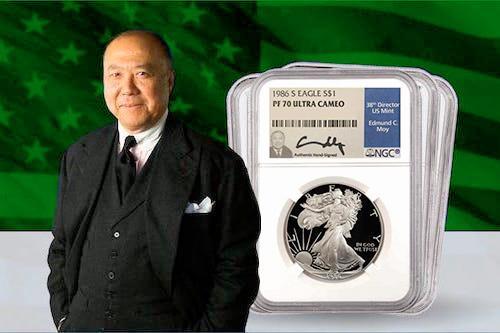 On the heels of one of the most significant Silver American Eagle Proof releases in the program’s history – the February 2021 installment, which is the last issue that will be struck with the coin’s inaugural reverse design – we’ve put together a list of what we at Wholesale Coins Direct see as the Top 5 Silver American Eagle Proof 70 coins ever produced to celebrate this remarkable coin series as it enters its 35th year.

Now in its fourth decade, the Silver American Eagle Proof program is one of the most celebrated and popular coin series offered by the modern United States Mint. More than 130 million coins have been invested in since the program's launch. Approved by Congress in 1985 under the "Liberty Coin Act," the Silver American Eagle was released for the first time in 1986. Generally, the U.S. Mint produces both a bullion and proof iteration of the Silver Eagle every year, intended for general bullion circulation and precious metals investing, respectively.

Over the course of its now 35-year tenure, the Silver American Eagle Proof has been struck at three U.S. Mint locations – the San Francisco Mint, from 1986 through 1992, the Philadelphia Mint from 1993 through 2000, the West Point Mint from 2001 through 2008, and again starting in 2010. No Proof Silver Eagles were struck in 2009. All three mint locations have produced Silver American Eagle Proofs since 2016, with the New York-based West Point Mint boasting the majority of the coin’s production.

In late October 2011, the United States Mint celebrated the quarter-century anniversary of its wildly popular and world-renowned Silver American Eagle program by assembling and releasing a bundle of five 2011-dated Silver American Eagles in a variety of finishes. The finishes included bullion, uncirculated, proof, and reverse proof. The coins were also struck at various Mint outposts, and therefore, bore different mint marks, including "W" for the West Point Mint, "P" for the Philadelphia Mint, "S" for the San Francisco Mint.

Three of the five coins were offered individually by the U.S. Mint, prior to the set’s release: the West Point-produced proof and uncirculated versions, both of which carry the “W” mint mark, and the bullion version, which does not have a mint mark, but, as was later confirmed by U.S. Mint representatives, was struck at the San Francisco Mint.

The two coins that were not released outside of the 2011 25th anniversary set were the reverse proof version, struck at the Philadelphia Mint, and the second uncirculated version, which was produced at the San Francisco Mint (this was the first time the uncirculated Silver Eagle had been struck at a Mint outpost other than West Point). Since these two coins were uniquely offered as part of the Silver American Eagle 25th Anniversary Set and not as stand-alone items – a fact that, in and of itself, gives complete anniversary sets an exclusive edge – they boast relatively low mintage figures.

Coupled with the exclusivity aspect of the reverse proof “P” coin and the uncirculated “S” coin, the U.S. Mint’s production limit of only 100,000 bundles drummed up significant excitement from coin investors for the five-coin set. As reported by a CoinWeek article at the time, orders moved to a waitlist four and a half hours after launch and were officially deemed "sold out" the following day.

Coins purchased directly from the U.S. Mint do not come graded. If an investor would like his or her coin to carry a grade, which solidifies the piece's condition and may bolster its long-term value, he or she would need to do so by submitting the coin to a third-party grading entity like the Numismatic Guaranty Corporation (NGC). To have coins certified as part of the 2011 25th anniversary set and receive the corresponding authenticity labels, NGC requires customers to meet specific submission guidelines, like shipping coins in their original, unopened U.S. Mint packaging

Complete sets containing all five coins officially labeled and graded at the MS70 (for bullion and uncirculated) and PF70 (for proof and reverse proof) levels have proven to be particularly sought-after pieces within the precious metals investments market.

The year 2019 was significant for the Silver American Eagle Proof program, both in production aesthetics and supply figures.

For the first time, the U.S. Mint offered its Silver American Eagle in the stunning enhanced reverse proof finish style as a stand-alone item. Earlier that year, a Silver American Eagle Enhanced Reverse Proof coin was offered as part of its Pride of Two Nations set, a joint venture with the Royal Canadian Mint, alongside Canada’s one-ounce Silver Maple Leaf coin.

A standard "Proof" finish features high-sheen, mirror-like fields – the background areas of a coin's design – and frosted devices – the design elements themselves. Conversely, a "Reverse Proof" coin boasts the same highly polished and frosted finishes but in an inverted fashion – frosted fields and shiny devices.

An “Enhanced Reverse Proof” finished coin is a striking take on both of these concepts. Like the standard “Reverse Proof” finish, Enhanced Reverse Proofs feature frosted fields and mirror-like devices, but what makes this unique iteration “enhanced” is the presence of polishing and frosting applied to multiple isolated areas of the coin’s design. As the Mint points out, this selective finishing “dramatically enhances the visual impact” of the Silver Eagle’s classic design.

Regardless of iteration, all Proof coins are born out of a rigorous and meticulous production method, undergoing several rounds of polishing, striking, and finishing that results in the exceptional beauties that have come to be revered so highly in today's investments world.

Adding to the 2019 Silver American Eagle Enhanced Reverse Proof's appeal is the issue's meager mintage figure, which was set at a mere 30,000 maximum by the U.S. Mint, the lowest mintage of an American Silver Eagle Proof to date. As NGC points out, this quantity is even less than the highly sought-after 1995-W Silver Eagle Proof, making the 2019 enhanced reverse proof issue a highly esteemed piece across the precious metals investment sector. The coin was met with such high anticipation upon its release that it sold out from the U.S. Mint in 18 minutes.

The Silver American Eagle Proof’s first six years of production were carried out at the San Francisco Mint, followed by a seven-year run at the Philadelphia Mint. Eventually, production transferred to the West Point Mint, where the coin is struck almost exclusively today.

Despite this coastal shift, affinity for the original “S-Mint” coins – those struck at the Eagle’s first home in San Francisco – has not subsided. On the contrary, demand has grown dramatically in recent years, leading to S-Mint Eagles being one of the U.S. Mint’s most lauded and sought-after investment-grade offerings.

The coin’s undeniable appeal has not gone unnoticed. In 2012, the U.S. Mint issued a limited-run reboot of the beloved S-Mint Silver Eagles, which were offered as part of a set commemorating the 75th anniversary of the San Francisco Mint’s present-day location.

Five years later, in 2017, the U.S. Mint released two more limited-run S-Mint Silver Eagles series. The first batch was offered as part of the annual "Congratulations Set," which, to that point, had only ever included West Point issues of the coin. Later that year, the second batch was released as part of the 2017 Limited Edition Silver Proof Set.

Enthusiasm for the 2017 S-Mint Eagles was so great that the Congratulations Set’s entire 75,000-quantity mintage sold out within two minutes of release!

With such a low population, demand for the 2017-S Silver American Eagle Proof will most likely continue to outstrip supply, making it likely that this issue – the first "S-Mint" Silver Eagle Proof since 2012 – will appreciate at a higher rate than more common coins.

In 1995, to commemorate the 10th anniversary of its American Eagle coin program, the U.S. Mint assembled and released a five-coin set that included Gold American Eagle Proof coins in all four of that program’s denominations – one-tenth ounce, one-fourth ounce, one-half ounce, and one full ounce – plus a “complimentary” one-ounce Silver American Eagle Proof. All five coins included in the 10th-anniversary set were struck at the West Point Mint, making the set’s Silver Eagle Proof incredibly unique since all of that coin's regular production at the time was taking place at the Philadelphia Mint.

The U.S. Mint released the American Eagle anniversary set for $999, and customers simply had to indicate on their order whether or not they also would have liked to receive the “bonus” 1995-W Silver Eagle Proof. Either way, the price of the set remained the same.

Ringing in at number one is the one that started it all – the Silver American Eagle Proof from 1986.

Being the first in a series – whether that be a limited-run design series or a permanent coin program with new releases every year – makes a coin particularly alluring, setting it apart from its subsequent counterparts for merely being the inaugural issue.

Additionally, the 1986 PF70 Silver American Eagles population is seemingly still relatively small compared to the original nearly 1.5 million coins produced by the U.S. Mint. According to its census figures, as of February 2021, the Numismatic Guaranty Corporation (NGC) has graded just shy of 52,000 1986 Silver American Eagle Proof coins, with slightly above 5,200 of those receiving the highest PF70 grade. At less than approximately half of one percent of the total population of 1986 Silver Eagle Proofs produced by the U.S. Mint, NGC-graded Silver American Eagle Proof 70 coins are quite rare, adding to the allure and potential return value of such pieces.

For the first 35 years of its tenure, the Silver American Eagle – in both its bullion and proof forms – has carried the original heraldic eagle design created by Mint Sculptor and Engraver John Mercanti. The imagery features a classic American bald eagle bearing a shield on its chest, with wings outstretched to either side. The bird clasps a flowing ribbon in its beak, which is monogrammed with the United States motto, "E Pluribus Unum." The eagle holds an olive branch in its right talon – a symbol of peace – and a bundle of arrows – perhaps symbolizing strength and unity – in its left. Thirteen five-point stars are struck above the eagle’s head, representing the 13 original colonies that would go on to form the United States of America.

The Silver Eagle's standard inscriptions surround the eagle image – "UNITED STATES OF AMERICA" along the top rim, mirrored by the coin's specifications of "1 OZ." "FINE SILVER" and face value of "ONE DOLLAR" along the bottom edge. The “W” mint mark, signifying production at the West Point Mint, also appears on the coin’s reverse.

The new reverse design, set to be released on an additional issue of the Silver American Eagle later in 2021, will feature an eagle descending downward toward a nest below. The mighty bird will carry an oak branch in its talons and will be encircled by the Silver Eagle’s standard reverse inscriptions – “UNITED STATES OF AMERICA,” the coin’s “ONE DOLLAR” face value, its “1OZ.” “FINE SILVER” precious metal contents, and the United States motto, “E PLURIBUS UNUM.”

The Silver American Eagle Proof will continue to carry its inaugural obverse design – a replica of Adolph A. Weinman’s “Walking Liberty” design – in 2021 and beyond (as far as we know at this time), save for some “refreshments,” according to the U.S. Mint

The Silver American Eagle Proof program from the United States Mint is a hallmark of American coinage that continues to intrigue and excite precious metals investors around the world. With nearly four full decades of production under its belt, this signature coin will undoubtedly continue enhancing its legacy of exquisite artistry, prestige, and value for years to come.