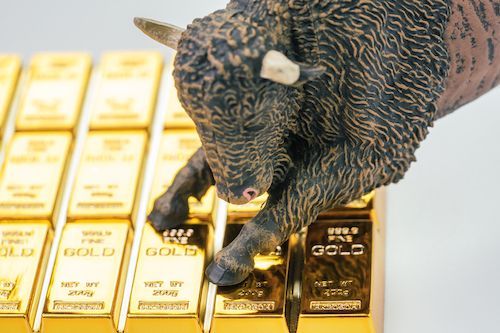 The final couple of days of the past week allowed the markets at least to take stock of Tuesday and Wednesday’s Federal Open Market Committee (FOMC) meeting deliberations and a subsequent statement by Fed chair Jerome Powell and press release. The somewhat euphoric knee-jerk reaction which took most markets substantially higher immediately after the event was, in our view, totally unjustified. So it proved to be, with Wednesday’s late trading, which saw considerable gains in the Dow, S&P, and NASDAQ indexes, more than completely wiped out on Thursday. On Friday, they continued on a downwards path, too, although heavy early losses were reduced towards market close. Equities were trending down again too in Asian and European trade at the start of the current week.

The Wednesday equities rise was attributed to Powell’s statement apparently appearing to rule out a 75 basis point Federal Funds rate rise at the June FOMC meeting. Many analysts seem to have feared that this would happen and would follow the 50 basis point increase imposed at the latest meeting. While Powell’s outright denial that a larger rate increase has been ruled out seems adamant enough, things could yet change and this week’s CPI and PPI data announcements, due on Wednesday and Thursday, will be followed closely to see if any change in the inflationary trend is yet becoming evident.

The latest Fed rate increases will not have had any effect on these figures as they will relate to April, before the latest rate rises were imposed – indeed the Fed rate increases will likely only have a limited effect on May figures as well. There should at least be, though, an indication from the new data whether the Covid recovery impact on prices will at long last be reversing.
The inflationary impact of supply chain disruptions as a result of the Russia/Ukraine war, the imposition of economic sanctions on Russia and China’s new Covid-related lockdowns will yet only be in their early stages. In other words subsequent inflation may only get worse before it begins to get better.

Bitcoin too appears to be struggling at the moment. It does tend to rely on investor confidence for any value growth and this appears to be waning despite the best efforts of the crypto promoters seemingly being out in force. Most of these, though, would be major beneficiaries from seeing bitcoin prices rise, so perhaps their views should be disregarded through self-interest in any case.

Bitcoin took a knock last week too from some decidedly adverse comments from investment heavyweights, Warren Buffett and Charlie Munger, of Berkshire Hathaway. The gold price so far seems to have been unable to find any real direction, except perhaps downwards in the face of the strong dollar. The price has fallen back over the past few days, but is still up around 2% year to date, which is more than can be said for equities, or for silver or platinum, all of which have fallen. Silver in particular continues to disappoint with the Gold:Silver Ratio (GSR) now running out to around 84. Palladium is the only one of the ‘minor’ precious metals to be in positive territory year to date, and with Russia the word’s No. 1 producer that cannot be too surprising. However its price fell quite heavily over the past week regardless, although it is the only precious metal seen to be picking up in price so far in the current week – but don’t necessarily expect this positivity to last.

Despite its somewhat disappointing performance over the past few weeks we still feel confident that the gold price will perform positively over the remainder of the year and, hopefully, end up above the $2,000 level again. It traditionally remains an excellent hedge against inflation. One may remember that last time there was a major crash in equity prices back in 2008, gold was hit quite badly too. But recovered all its lost ground inside a couple of months and then went on to new all-time highs over the next couple of years.

We’re not saying that this will happen again, but it is an indicator of the yellow metal’s resilience in times of general investment adversity, We don’t think that whatever the Fed throws at it in terms of interest rate rises the central bank will have much success in turning the inflation tide this year. Gold’s path may not prove to be a smooth one though, so beware a few more downturns along the way Pgm prices may be supported by supply issues given that Russia, in addition to being the world’s largest palladium miner, is also No.2 in platinum, while silver may ultimately benefit from an uplift in the gold price if this occurs, although it does have a propensity to let its investors down.

There is a chance that the Fed may actually welcome above-target inflation for some time to come, although perhaps not quite as much above target as current inflation levels appear to be heading. The US has built up enormous debt levels, and one of the accepted ways of bringing these down is through the effects of inflation. This tends to increase the tax-take enabling the nation to pay down its debts faster, particularly if wages even get close to keeping up with the accompanying price rises.

For the week ahead, much will probably depend on the new CPI and PPI figures. If they show inflation continuing to rise, as we think they may, the equity markets may well dip further as global recession fears persist. There seems to be little chance of any serious new developments in the Russia/Ukraine conflict, although the Russia Victory Day celebrations today may prompt some new statement on the progress, or even escalation, of the military action from President Putin which could affect the markets.

Gold has been continuing its downwards moves in Asia and Europe as the week starts out, so whether it will regain the $1,900 level this week, or in the near future, has to be decidedly uncertain. But the writer still thinks its medium to long term future remains positive.