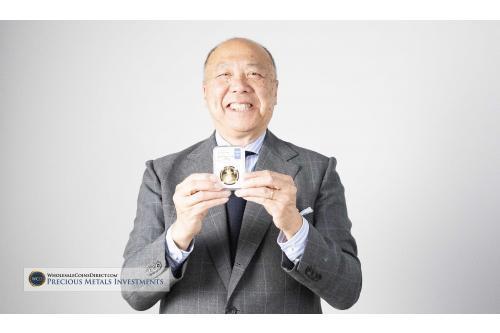 If you’re a client of Wholesale Coins Direct, a regular reader of our blog, or simply a precious metals enthusiast, there’s a good chance you’ve heard the name Edmund C. Moy a time or two.

Our team at Wholesale Coins Direct has gotten to know Ed Moy over the years thanks to our close working relationship on our Proof-70 hand-signed certification label program and Moy’s undeniable reputation in the field of numismatics and coin investing.

We recently caught up with the former U.S. Mint Director to chat about all things coins. Below, we detail Moy’s professional journey leading up to, during, and following his tenure as the 38th Director of the United States Mint, in addition to exploring three of his all-time favorite U.S. Mint coins.

“As the Director of the United States Mint, I was proud to preside over the American Eagle silver proof coins becoming one the world’s most popular silver coins. The obverse [that] features the iconic image of Liberty walking toward a sun rise embodies the beginning of an era of freedom and democracy.  And for the first time since the coin’s creation in 1986, the heraldic eagle featured on the reverse will change in 2021, making the final year of the old design very special to me and other collectors and investors.”

While this late-2019 Silver Eagle Proof is the same in many regards as other releases in the Silver American Eagle program, many features make this Proof coin stand out from the crowd. Perhaps the most defining feature of the piece is its beautiful Enhanced Reverse Proof finish.

An "Enhanced Reverse Proof" coin finish is a unique take on both the standard "Proof" and less common “Reverse Proof” concepts. While a “Proof” coin features high-sheen, mirror-like “fields,” which are the background areas of a coin’s design, and frosted “devices,” which are the design elements themselves, a “Reverse Proof” coin, while maintaining the brilliance of a Proof, is struck in the reverse fashion, with frosted fields and mirror-like devices.

In an exciting mash-up of the two, the “Enhanced Reverse” finish features frosted fields and high-sheen devices – like the “Reverse Proof” – but with polishing and frosting applied to multiple isolated areas of the coin’s design. As the Mint points out, this selective finishing “dramatically enhances the visual impact” of the Silver Eagle’s classic design.

Regardless of iteration, all Proof coins are born out of a rigorous and meticulous production method, undergoing several rounds of polishing, striking, and finishing that results in the exceptional beauties that have come to be revered so highly in today's investments world.

“The America[n] Eagle platinum proof coins are some of my favorite coins. Because the authorizing legislation gave the United States Mint flexibility in some of the designs, when I was the Director, I chose to explore designs that illustrated the preamble to the Declaration of Independence and encouraged Mint artists and engravers to be creative. The result was unique designs, relatively low mintages, and one of the most popular platinum coins in the world.”

In 2018, the U.S. Mint kicked off a three-year run of special-edition Platinum American Eagle Proofs to celebrate the dawn of the coin’s third decade in production. More than 20 years prior, in 1997, “[t]he United States Mint made numismatic history” with the launch of its first-ever legal tender platinum coin – the Platinum American Eagle Proof. Each of the three Platinum Eagles in the series features a unique obverse image representing one of the "unalienable Rights" guaranteed by the Declaration of Independence: Life, Liberty, and Happiness. The series started with “Life” in 2018, followed up with “Liberty” in 2019, and now draws to a close with “Happiness” in 2020.

The 2018 “Life” Platinum Eagle Proof depicts a young Lady Liberty teaching a child to sow seeds in a sprawling American field. The 2019 “Liberty” Platinum Eagle Proof is a brilliant display of American bravery and idealism, boasting an image of Lady Liberty proudly raising a torch into the air with her right hand – “an emblem of the guiding light that liberty provides,” as the U.S. Mint puts it – and cradling an open book, representing the rule of law in America, in her left arm. The third and final “Happiness” Platinum Eagle Proof, released in January 2020, again shows a young Lady Liberty, this time standing in a tilled field cradling an overflowing cornucopia in her right arm, which is packed with fruits presumably harvested from the land on which she stands. According to the U.S. Mint, the bounty of the cornucopia represents the nurturing only Liberty can provide to "nourish the body, enliven the mind, and satisfy the soul." She tenderly watches a girl playing in the field who grasps an olive branch in her right hand and beckons a butterfly with her left. One could image the two side-by-side characters epitomizing the vitality that flourishes under Liberty's caring watch.

Learn more about the three “Preamble to the Declaration of Independence” Platinum Eagle Proof 70 coins here, here, and here.

“For me, the American Eagle gold proof coin sets the high bar for a great coin: a beautiful and patriotic design, exquisitely made, and popular with investors and collectors alike.  I love the uniquely American design and that it was made with pride by the men and women of the United States Mint.
The American Eagle gold proof coins have one of the most iconic designs ever made: Liberty being led by enlightenment and bringing peace, bringing democracy into the world after being established in America, symbolized by the U.S. Capitol. Every time I see this coin, I’m reminded of the ideals our country [was] founded on.”

The obverse motif of the Gold American Eagle harkens to the “golden age” – pun intended – of American coin design by replicating one of the most renowned and beloved images in U.S. coin history – the Saint-Gaudens pre-1933 Double Eagle Liberty design. Saint-Gaudens' work, initially struck on the U.S. $20 Double Eagle gold coin from 1907 until 1933 and now reproduced on the late-20th-century Gold American Eagle bullion and proof coins, depicts a dynamic image of Lady Liberty gloriously striding forward holding a torch in one hand and an olive branch in the other. Liberty's hair and dress flow elegantly around her as beaming rays of sun peek over the horizon in the background. The entire image is encircled by shining stars while the word "Liberty" and year-of-issue line the top edge and right side of Liberty, respectively.

Gold American Eagles bear Miley Busiek’s “Family of Eagles” motif on its reverse. The reverse sides for the Gold (and Silver) American Eagles will feature new designs beginning in 2021 for at least the bullion issues. The same designs are expected to be used on the Proof issues of the coins eventually.

The Gold American Eagle is the United States' official gold coin and is produced in both bullion and proof finishes each year. For its inaugural run in 1986, the U.S. Mint only produced a one-ounce version of the Gold American Eagle. In 1987, both one-ounce and half-ounce versions were made, followed by two additional sizes in subsequent years – quarter-ounce and tenth-ounce. The coins carry legal tender, albeit nominal, face values of $50 for the one-ounce coin, $25 for the half-ounce, $10 for the quarter-ounce, and $5 for the tenth-ounce.