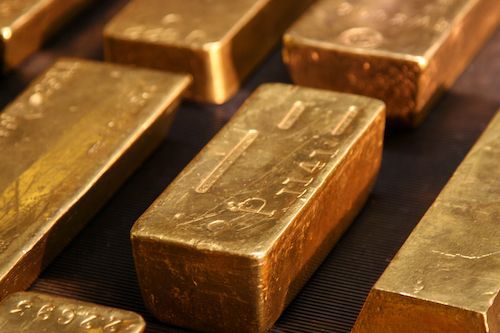 When asked about the benefits of increasing their gold holdings, 59% of central banks cited gold's historical position as the most relevant benefit. Nine percent of central banks think gold is "somewhat relevant" to a "de-dollarization policy." See the following graphic.

It is possible the 9% thinking about de-dollarizing may be an inaccurate reflection of how other central banks are feeling. 42% of central bankers expect to hold fewer dollar reserves five years from now. The survey includes anonymous quotes concerning central bank de-dollarization and it appears some sentiment is stronger than “somewhat relevant.”

“RMB participation should rise, and that would lower the portion allocated to USD.”
- Anonymous Central Banker

“I think the sanctions on Russian due to the ongoing Russia-Ukraine conflict are going to increase gold demand and central banks’ holding of gold as a reserve asset to hedge against the currency risks. In my view, I think central banks will increase holdings of gold in their reserve portfolios.”

“As other countries become more influential on the global stage, investments in the US will become slightly less than they are now. Increasing transparency and liquidity in those market economies will also contribute to this.”

“Russia sanctions and the ability of countries to freely access their USD holdings has raised many questions about USD liquidity and access in times of need.”

In the survey, ten central banks do not hold gold reserves. The primary reasons these banks do not hold gold are "preference for better yielding or higher" and "cost of holding hold" (vaulting or custodial fees, etc.)." All the major U.S. stock indices and cryptocurrencies are all down more than 10% since January 3, 2022. Gold is down less than 1% on the year. -0.86% is a better return than -28.55%.

Some hedge funds are following the lead of central banks and are also buying gold in larger numbers. "When countries don't trust each other over bonds and currencies, gold becomes the ultimate reserve asset," said hedge fund manager David Einhorn.

A 20% downturn is the definition of a bear market. Excluding the Dow Jones, all American stock market indices are officially in bear territory for 2022. Gold is outperforming all major indices in 2022, again showing why its historical position is insurance against downturns in the market. Insurance is not about getting rich but protection from getting poor.

It is essential to reiterate that central banks hold gold primarily because of gold's historical position.

Central banks are increasing their gold holdings and preparing to de-dollarize within five years. What should you do if the largest government banks are concerned about the economy and are buying gold?