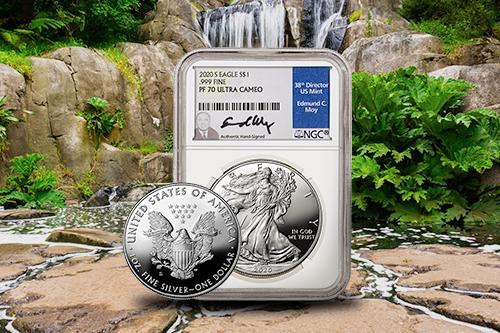 With the Coronavirus pandemic throwing its product schedule into uncertainty for the better part of 2020, the U.S. Mint is now back up and running with an end-of-year lineup that already has the numismatic sector abuzz with anticipation.

The Mint’s fall product releases feature a few new exciting highlights, such as the Uncirculated Palladium American Eagle coin, the first-ever Uncirculated finish issued for this series, and the highly-anticipated End of World War II 75th Anniversary American Eagle Proof coins in both gold and silver. Alongside these novel pieces are also a few fan favorites, like the Silver American Eagle S-Mint Proof, which has a release date of Tuesday, October 13, 2020.

While the Silver American Eagle S-Mint Proof is a highly anticipated investment piece every year, 2020 marks a uniquely significant turning point in the coin’s 35-year history. For the last time ever, the Silver American Eagle Proof will bear John Mercanti’s heraldic eagle reverse design, which has been the only image ever struck on the coin's backside since its launch in 1986.

The fact that this year marks the last issue in the coin’s inaugural design run, coupled with the inherent allure of the coin’s "S" mintmark, sets the 2020 Silver American Eagle S-Mint Proof up to be an even more appealing and unique investment piece than in years past. Further enhancing the coin’s rarity, the 2020 issue is subject to a 200,000-quantity mintage and product limit, versus no limits in 2019.

Clients who invest in this notable coin through the Wholesale Coins Direct also reap the benefits of unique value-adds like the Ed Moy signature certification label, a feature available exclusively to Wholesale Coins Direct clients, and the value-enhancing perfect PF70 coin grade, as deemed by the Numismatic Guaranty Corporation (NGC).


The Silver American Eagle has a New Design for 2021


Both the silver and gold American Eagle coins will appear with new reverse images beginning in 2021.

The Silver American Eagle S-Mint Proof, which has featured John Mercanti’s heraldic eagle since its initial release in 1986, will bear a new image of an in-flight American Eagle as it descends back toward earth. The eagle's wings are shown fully extended to either side in a brilliant display of glory, pride, and elegance. Additionally, the new eagle is seen clasping an oak branch, which symbolizes strength, in its talons.

John Mercanti's reverse eagle design features a stately image of an American eagle bearing a shield over its chest and clasping an olive branch in its right talon and a bundle of arrows in its left. Whereas in the new 2021 design, the branch carried by the bird symbolizes strength, Mercanti's imagery evokes peace and victory, as illustrated by the eagle's olive branch.

Like the forthcoming 2021 design, Mercanti's eagle is depicted with outstretched wings, although his bird does not seem to be in flight, per se, but rather floats against the coin’s silver background. The nation's motto, "E Pluribus Unum," appears on a flowing ribbon that the bird clasps tightly in its beak.

The verbiage on the back of the 2021 Silver American Eagle will be the same as its current design, albeit with variations in positioning. The 2021 coins will display “United States of America” on the top edge of the coin’s reverse, opposite its “One Dollar” face value and “1 oz. fine silver” precious metal composition. The United States motto, “E Pluribus Unum,” will appear to the right of the eagle image in the new design, versus appearing on a flowing ribbon held in the bird’s beak in the current version.

Referring to the new designs, Mint Director David J. Ryder notes that the images “build on the United States Mint’s heritage of artistic excellence and fortify the American Eagle Coin Program’s status as an icon in the numismatic and art worlds.”

The new Silver American Eagle reverse imagery was created by Mint Artistic Infusion Program (AIP) designer Emily Damstra and sculpted by Mint Medallic Artist Michael Gaudioso. Ms. Damstra notes that the inspiration for her design “grew from a desire to show our national bird – with all of the values it embodies – in a unique way that could also convey traits such as diligence, cooperation, care, and protection.”


While today, the Silver American Eagle is struck almost exclusively at the West Point Mint in New York State, the coin's roots reach to the foggy shores of California’s Bay Area. Silver American Eagles were minted in San Francisco for its first six years of production before being transitioned to the East Coast – first to Philadelphia, then to West Point – making it a genuinely bi-coastal coin.

Still not enough to quell the public's seemingly insatiable thirst for that beloved "S" mintmark, the Mint followed up the 2012 commemorative set reboot five years later with two more limited-run series. The first 2017 issue was included as part of the Mint’s annual “Congratulations Set,” and the second was packaged alongside other silver proofs in the Mint’s 2017 Limited Edition Silver Proof Set.

Responding to these limited-run issues' success, the Silver American Eagle S-Mint Proof was subsequently offered as a stand-alone item in both 2018 and 2019. The coin was met with high investor enthusiasm in both years. The 2020 issue will be the last time the Silver Eagle Proofs will feature its inaugural reverse design, positioning it as even more of a stand-out item this year.


Clients who invest in precious metal coins through the Wholesale Coins Direct enjoy exclusive benefits that have proven time and again to enhance the legacies and long-term values of precious metals investments.

One such feature offered exclusively to Wholesale Coins Direct clients is the highly sought-after certification labels hand-signed by former U.S. Mint Director, Edmund C. Moy. These labels, which accompany every Proof 70 coin offered by Wholesale Coins Direct, have proven to be extremely lucrative value-adds and have been met with extreme fanfare and impressive premiums as a result.

Ed C. Moy served as the 38th Director of the U.S. Mint from 2006 to 2011. Before this role, Moy was Special Assistant to President George W. Bush for more than five years, during which he assisted with the development and launch of the nation’s new Department of Homeland Security following the September 11th attacks in New York City. Outside of public service, Moy is known for being a prominent businessman, author, economist, and public speaker.

In addition to the Ed Moy certification labels, Wholesale Coins Direct clients are able to add the highest-quality precious metals pieces available on the market to their investment portfolios. Wholesale Coins Direct offers an inventory of investment-grade coins made up almost exclusively of perfect-score PF70 pieces, which is the highest certification granted by the industry-leading precious metals assessment and certification organization, the Numismatic Guaranty Corporation (NGC). While the U.S. Mint sells investment-grade coins directly to the public, these coins are not certified or guaranteed to be of a specific quality. They may bear, for example, knicks, blemishes, or perhaps even less-than-perfect image quality. By having our inventory of Proof coins graded before being sold, we can offer clients top-of-the-line precious metals pieces that have proven to enjoy higher returns year after year. Read more about the PF70 grade from NGC here.