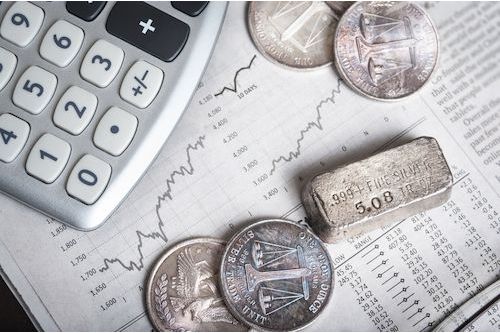 Chantelle Schieven and Dr. Tom Brady of Canada’s Capitalight Research – including the Murenbeeld & Co Precious Metals Consultancy - have put together their latest Silver Monitor newsletter incorporating their new silver price forecasts for the next six quarters.

They have followed the methodology developed by Martin Murenbeeld for his Gold Monitor newsletter in selecting three potential pricing scenarios – a bearish one, a most likely one and a bullish one, and attaching a weighting to each of these, thereby coming up with a probability weighted average for each quarter. However, in their latest assessment the weightings between their various scenarios are far more disparate than Murenbeeld’s gold ones, perhaps reflecting the much more volatile nature of silver prices. Their latest price forecasts in US$, with the weightings applied, are set out below:

Scenario A – the bearish one – is indeed an exceedingly gloomy one for the silver investor. The analysts perhaps have recognized this in applying an extremely low weighting to their bearish projections, particularly to the final quarter of 2023. Somehow one doubts that even the most bearish among silver price forecasters would see the silver price collapsing to $14 by late 2023. But we shall see. Stranger things have happened in the markets. (Silver has indeed already fallen below the key $20 level as I write and show little signs of recovering despite gold picking up at least a little from a similar steep fall. However, major US holiday weekends often seem to provide a significant inflection point for precious metals prices. We will thus be particularly interested in what lies ahead short term.)

The Capitalight commentators do point out though that silver traded well below $20 an ounce for most of 2015-2020 and although, like gold, gained strongly in the early days of the Russia/Ukraine War, came back down again fairly rapidly in April and May and has shown little sign of recovery since. It has been underperforming gold of late and the latter has been far from strong Itself coming back below $1,790 intra-day on Friday before picking up back to above $1,800 again, but only just!

Thus the analysts see weak performance over the next couple of quarters and a possible slight improvement if central banks start to reverse course on their interest rate raising programs in the final quarter of the year, and early next, as a response to a possible (we think likely) slip of economies into recession as a result of a more aggressive interest rate and tightening policy in what we see as a perhaps futile attempt to control rapidly rising inflation. They do see a gradual recovery thereafter, but certainly not by nearly enough to satisfy the silver bulls. Even the bullish Scenario C would not do that, although it would at least offer some hope for the silver investor.

Silver does have a predilection to move pari-passu with the gold price, though and if the latter advances as, for example, the latest Goldman Sachs forecasts suggest and hits $2,500 by the year-end, silver could yet do rather better than the above forecasts suggest. But the GS forecasts seem to be at the more optimistic end of the spectrum. There are plenty of others from respected analysts which see precious metals prices dipping. We still stand by our own suggestion that gold could well get above $2,000 by the year-end however- if not as high as $2,500 - and if so silver could do better than the Capitalight forecasts indicate, but still by not nearly enough to satisfy the silver bulls, although $28 plus would seem to be a possibility if this were to come about. But don’t hold your breath – we don’t have a huge amount of confidence in this target level.

Silver always seems to have a facility to confound its followers which is why it is sometimes referred to by traders as the ‘devil’s metal’. Too many investors have had their fingers burned by chasing the price up only to be disappointed in the long run when it fails to meet their optimistic expectations and falls right back once more. Could this be the time it confounds this pattern? We hope so, but we fear this may not be the case yet again.