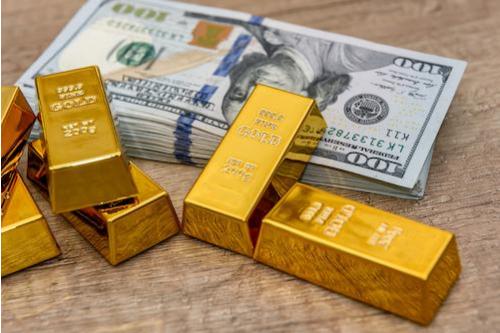 As Russian attacks on Ukraine intensify, with President Putin’s forces trying to enforce the latter’s capitulation through weight of arms and urban destruction, the traditional safe havens of gold and the dollar have been mostly rising in alignment.  Typically a rising dollar index is tantamount to a fall in the price of gold and vice versa, but when the two rise sharply in unison it suggests world markets are going through a very nervous period indeed.  The possibility of a pan-European, or even a global, war developing is considered a distinct possibility as escalation of the Russia/Ukraine conflict seems to be worsening.

Not only is the war in Ukraine adjudged to be spiraling out of control, but it is also fuelling inflation in both Russia and the West contributing yet another threat to global economic stability. Western economic sanctions on Russia are already having a strong impact there.  Russia is a hugely important producer of so many natural resources on which the West is normally reliant, including oil and gas, wheat and all the precious metals.  Thus, the sanctions impositions, if they hold, would not only be devastating to the Russian economy, but also have a significant, although perhaps temporary, price inflation effect on the West.  If the sanctions on Russia as a result of its annexation of Crimea are anything to go by, these new more severe sanctions are here for the long term.   The West may learn to live without the Russian-produced commodities, but this can’t happen overnight and meantime supply/demand factors are bound to have an enormous worldwide price consequence.

We have sometimes scorned predictions of huge precious metals price rises, but the Russian invasion of Ukraine is perhaps the ‘black swan’ event which could well tip things over the edge – maybe it is already doing so.  The negative consequences for equities markets are already being seen, as are the more positive effects on traditional safe haven counters like the dollar and gold and it is perhaps significant that the gold price already breached the key $2,000 barrier in Europe this morning, although this level has been brought back down sharply as trade has continued – but for how long?  Global equities are down sharply.  Of the precious metals, palladium, for which Russia is the world’s dominant producer, has been the greatest gainer so far.

President Putin’s actions may have already started to lead to the global equities crash which many economists have been predicting for so long.  If it does happen the consequences for the investment community and to many national economies could be immense.  Meanwhile inflationary concerns have to be growing by the day, while the Fed’s capability of addressing the issue and bringing it down seems to be diminishing.

The International Monetary Fund (IMF) has also warned that the Russia/Ukraine conflict, and the economic sanctions already imposed on the former, will likely have a ‘severe impact’ on the global economy.  According to media reports the IMF statement also noted that the conflict was leading to an ongoing crisis which "was creating an adverse shock to inflation and economic activity at a time when price pressures were already high."

The increased Russian sanctions have to be contributing strongly to the issue – we are already seeing huge increases in grain, oil, gas and precious metals prices, while profitability for those companies with Russian trade connections is declining rapidly.  In the US, Fed-imposed interest rate rises are highly unlikely to quell the inflationary trends and could even further reduce corporate profits and bring national employment percentage reductions to a grinding halt. And what the Fed tries to do in the US will undoubtedly set a pattern for central bank responses all around the world.

The next US Consumer Price Index data release is due on Thursday and seems unlikely to show any improvement on the previous 7.5% annual increase level – indeed it will quite probably prove to be even more downbeat.  Furthermore things are only likely to get worse before they start to improve.   We have said before, while high inflation may arguably not be specifically beneficial for precious metals prices, negative real interest rates tend to be decidedly positive for non interest-generating assets like gold, and these real rates seem to be becoming more and more negative by the day.

We have already upped our price forecast for palladium for the year ahead, for which Russia is comfortably the world’s largest producer and our revised, and hugely increased, price forecast is already looking hugely conservative.  The Russia/Ukraine conflict has been a huge game-changer affecting all our earlier forecasts.  Indeed our prior forecasts for year-end prices have already been overtaken for all except gold at the time of writing, even though our initial forecasts had been decidedly bullish compared with most other commentators. This shows just how much a severe geopolitical ‘black swan’ event can move prices.  Let’s hope there are not more of these in our immediate future, but we are not yet even out of the first quarter of the year.  There is plenty of time for others yet in 2022.

Our newly revised forecasts for likely year-end price levels are thus set out below:

Even these hugely upwardly increased price forecasts may prove to be conservative if the Russia/Ukraine conflict does not come to a rapid end, or if another similarly worrying geopolitical crisis emerges.  These forecasts seem more than likely to at least come about if enhanced Russian sanctions remain in place and/or inflation continues to be a major problem. With the Fed seemingly powerless to stop inflation in its tracks without initiating a major US, and global, economic recession, from which it may draw back, then these kinds of price levels are looking to be almost inevitable.