Is the gold price breaking out – at last? 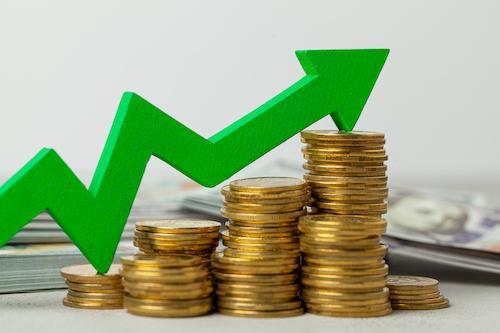 Is the gold price breaking out – at last?

We are pleased to note that the gold price is pretty much following the path we predicted after the big drop following the FOMC meeting of a couple of weeks ago. But it’s probably still too soon for confirmation that Friday’s big price rise, which took it back up to close to the $1,860 mark at the end of the week, represents a permanent breakout. It will probably need to hit $1,885 or perhaps $1,900 or higher and hold on to this level before we can be confident the recent price increase might represent a permanent move. Silver has moved up a little in price, ending the week at over $23.50.

Gold and silver prices had initially dipped sharply on the apparent moves by the U.S. Federal Reserve Bank (the Fed) to raise interest rates more aggressively than markets had been anticipating to combat seemingly ever-rising inflation. We felt that this was a decided, misplaced, misreading by the markets of the considered effects of the Fed moves on both gold and equities. We thought at the time that the moves should drive the gold price upwards and equities in the reverse direction - as has indeed been the case.

The latest U.S. Consumer Price (CPI) figure for January has now come in at 7.5%, the highest level for 40 years, so there is little sign that inflation is yet beginning to turn down. We do suspect, though, that some of the factors contributing to the rise may begin to fall out of the equation within the next few months. But as long as real interest rates remain in negative territory, that is still going to be seen as positive for gold – and it seems unlikely in the extreme that the Fed can raise interest rates sufficiently rapidly to see real rates increase by enough to make them positive without driving the U.S. economy into a deep recession. The Fed won’t want to be seen as responsible for doing that. Despite its supposed independence, it will also be under pressure from the Administration not to do anything to precipitate such an economic downturn.

Gold tends to thrive on uncertainty and geopolitical crises. What we see as a possibly phony threat of a Russian invasion of Ukraine has also been assessed by some as being at least instrumental in driving the gold price up to its current heights. Russia’s President Putin has said all along that Russia will not invade and has described the Western reaction to Russian troop movements as hysteria.

In our view, the likely cost of a Ukraine invasion in terms of severe casualties on both sides means that such a military conflict remains unlikely for now. Modern day superpower political maneuvering often seems to involve tentative military threats in order to test out potential responses from rival states and/or their allies without culminating in actual military conflict.

The politics behind the invasion rhetoric has probably been built up to such a crescendo in the West that non-invasion will be claimed as a diplomatic success by those countries which have increasingly suggested that an invasion is imminent or even inevitable. The two countries which have been most prominently critical of the Russian troop build-up on Ukraine’s borders and the consequent likelihood of a military incursion – the U.S. and the U.K. - both are suffering from serious domestic political issues, and local public opinion might benefit their respective governments immensely from being sidelined by a supposed end to perceived Russian saber-rattling - whether this ever represented a realistic threat of a Ukraine invasion or not.

Along with the rise in the gold price, U.S. stocks turned down quite sharply on Friday too. This resulted from renewed consideration of the Fed-induced likely rise in interest rates at a more aggressive level than had earlier been considered. This was exacerbated by the projected end of Fed bond and mortgage security accumulation due to take place within the next month. The potential Fed moves represent a threat to stock prices given that some, or all, of the Fed bond and security buying largesse, had been finding its way into the equities markets, thereby boosting stock prices to what we see as perhaps unjustifiable levels.

The threat of higher interest rates will also potentially limit business profitability. Even bitcoin, seen as another investment rival to gold, saw something of a downturn into the weekend. Seemingly ever-rising equities, in particular, had been seen as a counter to precious metals investment in that this had been seen as a more reliable path to wealth accumulation.

We think we will have to wait and see how markets will react this week and next before drawing any real conclusion that gold is breaking out of its recent trading range. However, at the moment, the momentum is definitely with the yellow metal and also suggests perhaps continuing equity weakness, so be prepared.

If gold does breach $1,900 within the next week or so and looks to be maintaining that level, this could well make our forecast of $2,000 gold by the year-end turn out to be a ridiculously conservative one.