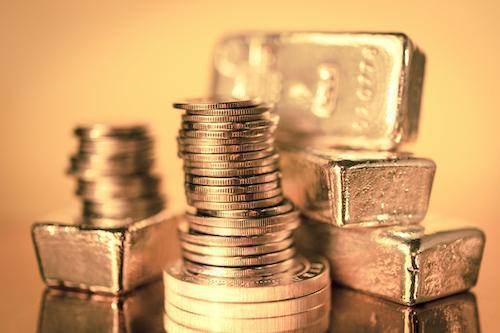 Gold soared up past its previous $1,922 spot price high on Monday morning hardly pausing for breath. Some commentators had suggested that this level would provide a resistance point, but it was breached with apparent ease. There is little doubt now that precious metals have caught the investment eye with mainstream equity progress perhaps vulnerable given the ongoing virus infection growth. A global recession is very much still in progress with no end in sight and a plethora of geopolitical worries remain on the horizon.

The dollar index has also been falling sharply which tends to be a positive for gold as a rising gold price is seen by many economists as a signal of dollar and U.S. economic weakness – although whether it is the rising gold price rise causing the dollar index to decline, or vice versa, which is open to question. Silver at last has been rising faster than gold in percentage terms, although remains at historically low levels in comparison with gold. Thus a flight to the kind of safety envisaged in gold and silver investment in particular seems to be well under way and price growth in this sector looks like it will continue - perhaps after a short consolidation period.

The rapidity of the recent precious metals price surge has taken this writer somewhat by surprise, although not the rise in itself. The thought had been that $1,800 gold might be achieved by late in the northern summer and $1,900 and perhaps $2,000 gold sometime in the fall. There may well be a sharp correction ahead, but a $2,000 gold price target now looks more than likely to occur sometime this year, and if prices continue to accelerate may be achieved sooner rather than later.

While Monday’s gold price may represent an all time high in actual dollars, it still has a way to go before it surpasses its inflation adjusted high point! According to an assessment by Canadian-based gold analysts Murenbeeld & Co in their latest Gold Monitor newsletter, the real inflation adjusted gold price high was actually reached in January 1980 with a London pm fix of $850 – which the analysts calculate as being equivalent to some $2,787 in today’s dollars. This normally very conservative consultancy goes on to say that the “gold price will rise beyond $3,000 in the event debt/financial crises, a weak dollar, and monetary profligacy dominate the forecast horizon” which indeed all look to be very much the case at the moment.

The Murenbeeld newsletter goes on to note “We think that gold will set a new inflation-adjusted high during this bull cycle. Fiscal and monetary policies will be wildly expansionary over the next 6-8 quarters at a minimum.” Murenbeeld & Co is reckoned to be a very conservative specialist gold consultancy so such comments are, in the writer’s opinion, hugely bullish, although still relatively conservative in the eyes of some pro-gold commentators who see $5,000 or even $10,000 gold or above in their crystal balls. The latest price rises do seem to be occurring far faster than the Murenbeeld analysis initially suggested and may even prompt a rapid re-assessment of the firm’s latest gold price forecasts.

As for silver, this metal is benefiting even more than gold in terms of percentage price increase after being in the doldrums for much of the past three years, although it is still at only around half the price it reached in its 2011 run up to close to $50. The Gold:Silver ratio dropped below 80 on Monday for the first time since mid-2018. Whether it will continue to fall to the benefit of silver vis-a-vis gold remains to be seen, but one should not rule that out given the recent enormous flows of metal into the big silver ETFs. The 10-year average Gold:Silver ratio is perhaps around 60, which suggests silver could move further upwards. However it is very much an industrial metal nowadays although not as much so as platinum and palladium, and growth could thus be restrained in the kind of global economic recession we are seeing currently.

But that is following logic and some markets, notably U.S. equities of late, have not been behaving logically since the virus onset. Markets have been skewed by the rise of people confined to their homes in lockdowns, or self-isolating, accessing commission-free easy brokerage platforms like robinhood.com. These may be mostly small investors, but their numbers are enormous and they are bringing money into the markets which just had not been seen before.

As I pointed out in a recent article published on the sharpspixley.com website in the UK Gold and silver booming as Robinhooders start to pile in these new investors have been at least in part responsible for the somewhat counter-intuitive recent rises in U.S. stock indexes in the depths of what has been described as the worst quarter economically in American history. These investments are also indirectly boosting precious metal prices by moving funds into the bullion-related ETFs.

Gold and silver investment is a tiny market in comparison with general equities, so an influx of new money can have a massive short term effect on prices. And there are indications beginning to show that these new investors are becoming attuned to precious metals as a relatively safe investment compared with some of the approaching-bankruptcy and recovery stocks which seem to have been a major focus up until now. In particular the GLD and SLV ETFs are moving up the popularity rankings on robinhood.com – the most high profile of these new investment platforms - and increased metal-backed ETF investment means higher demand for the metals on which they rely. The huge recent multi-million ounce metal flows into the silver ETFs in particular is evidence that some of the big money is placing its faith in silver too.

There are also reports that the U.S. Mint is having problems sourcing enough gold and silver supply to meet demand and has cut allocations of bullion coins accordingly. There is also something of a short squeeze occurring as some big silver shorts on the COMEX are struggling to extricate themselves from their huge potentially massive loss-making positions.

So all in all things currently look to be very positive for precious metals, and for gold and silver in particular. There may well be setbacks on the road to ever higher prices as profits are taken along the way. This may be particularly true of silver with memories of burnt fingers in the 2011 price surge, and subsequent collapse, still in some investors’ memories. But the trend will almost certainly remain upwards as long as the current economic and political uncertainties linger and the dollar index continues to fall and the hoped-for V shaped economic recovery looks ever more elusive.

The virus-related downturn is likely to remain in place for many months yet before recovery even starts to begin and this will continue to boost the safe haven appeal for precious metals investment. The virus effect has been very much a game-changer and has taken longer to kick-in than many had forecast. But it is very much the case now and should see gold and silver continue to advance for many months, if not years, to come.