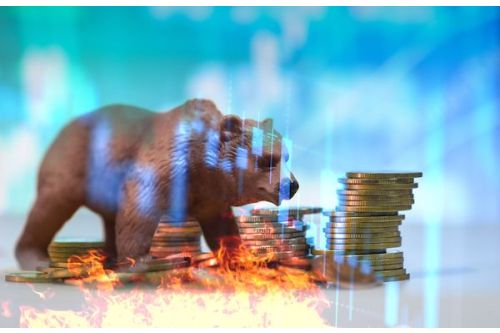 I have to say I had even begun to doubt my forecasts on inflation and the U.S. economy, given the weight of media analysis telling me I was wrong. But then came Friday’s Consumer Price Index (CPI) data from the Bureau of Labor Statistics (BLS), which almost confirmed my earlier expectations. After an initial downwards move, the gold price shot up sharply, ending the day above $1,870. At the same time, general equities and bitcoin (BTC, and ETH in particular) turned down even more sharply. Perhaps the one slight anomaly, though, is that the gold price advanced despite a stronger dollar index (USDX) – the two are usually contra-indicated, as I had previously pointed out.

The May CPI figure showed a 1% increase for April and an 8.6% rise year-on-year – once again the highest annual increase for over 40 years. The principal drivers were steeper energy and food prices, and with little sign that either is even beginning to come back, inflation may not have peaked yet. What that means is that the Fed, at this week’s FOMC meeting, is unlikely even to begin to contemplate reducing its proposed tightening, balance sheet cutting. Interest rate-raising programs and there are even fears that it may consider extending their respective timescales, or even increasing their rates, in ensuing commentary, at the event itself, or in its post-meeting statements.

The higher USDX figure will have been because of the near certainty of a 50 basis point Federal Funds interest rate rise (some are even suggesting higher, but in our view this is unlikely) being imposed at this FOMC meeting, and the likelihood of further similar increases in July, and now possibly in September too. Current expectations are that interest rates will be at a level of at least 2.5-2.75% by the year end, but some are projecting them even higher if stronger inflation levels are seen as persisting. (Of course this goes against the conflicting theory that the Fed may even make a policy about-turn to try and prevent a severe downturn in the U.S. economy.)

Other central banks may also be lagging behind in imposing their own interest rate rises, although these are undoubtedly coming, which also helps account for the stronger dollar for now. Fed policy is thus almost certainly currently leading to a period of stagflation brought on by the high energy prices and an otherwise flat to declining economy. If inflation is not significantly reduced by the Fed moves, and equities are further depressed, a recession – or worse - could quickly follow. Given that much of the inflationary pressure, particularly the energy price element, is largely outside the Fed’s control, the danger of a full-scale U.S. recession does seem to be getting ever closer.

As a result, a safe haven asset like gold – one of the few major asset classes currently trading higher year-to-date (up around 2% whereas the Dow is down 14%) – is almost certainly a better wealth protection bet in the current inflationary environment, but beware, it could also be brought down in price, perhaps temporarily, by liquidity issues if equities and bitcoin continue to fall heavily.

Whatever the Fed decides to do, some other factors are turning ominous for the U.S. economy, and where the U.S. is headed much of the world tends to follow. Business confidence and GDP growth predictions are slipping and today’s Producer Price Index (PPI) data release is unlikely to ease fears. Indeed it may well exacerbate them. Unemployment figures for the moment seem to be marking time, but if business confidence is indeed turning negative these are likely to start to increase. This could cause even more worries for the Fed which is committed to maintaining an optimum employment level.

Neither the Fed, nor the U.S. Government can be said to have had a positive track record in predicting the forward state of the economy or inflation, and the former will likely suffer for this in the forthcoming midterm elections, not that a Republican Administration would have necessarily fared any better in this respect. Timing can be everything in political success or failure.
The Russia/Ukraine war may be taking place thousands of miles away from the continental USA, but its effects on the U.S. economy should not be under-estimated. Thankfully, so far, China has largely remained on the sidelines, perhaps fearful of any economic consequences of more overt support for its normal ally, while it battles its own Covid resurgence difficulties. If the Russia/Ukraine war escalates, either through the use of weaponry deemed unacceptable, or an extension into other independent nations, that could have a very significant further effect on inflation and the gold price in particular. We don’t see this kind of escalation as likely, but then we didn’t think Russia would invade Ukraine in the first place. How wrong we were then. Let’s hope we are not wrong again!

I commented recently on the extremely high current levels of market volatility. I see no change in this for the foreseeable future and for as long as high inflation levels persist, equities and bitcoin will almost certainly continue to weaken and hard assets like gold should hold their value best, although the gold price came off fairly sharply again this morning in Asia and Europe, as the dollar strengthened a little further. Cryptos – ETH in particular - also crashed heavily. This volatility could be with us for some time yet, but ultimately prices will plateau and the perception of continuing inflation increases will thus fade away. However that will leave us mostly with considerably higher retail prices than we have been used to and thus our respective currencies will have lost a substantial portion of their purchasing power wherever we may be domiciled.

Let’s hope that safe haven counters like gold help us keep up – it may be one of the few assets which do.