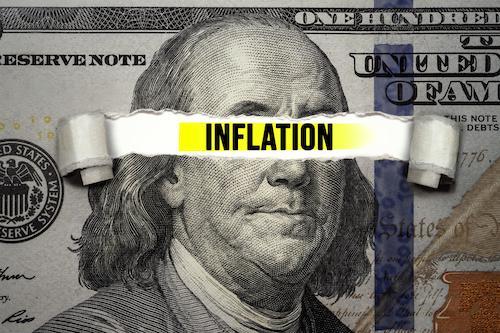 The big change which initially affected both precious metal and equity markets alike was that Powell stated that the Fed’s maximum employment target had been met sufficiently to allow it to concentrate almost wholly on inflation control. There was the admission that inflation had trended higher than had previously been suggested and that high inflation levels would likely persist for longer than the Fed would be prepared to accept without it taking measures to bring them back down. That was a far cry from the ‘transitory’ inflation prediction that had prevailed up until only a couple of FOMC meetings ago when Powell had stated that the earlier transitory forecasts were no longer appropriate.

The latest Consumer Price Index (CPI) data for December had put the annual inflation rate at 7% - the highest level for 40 years or more and the latest data suggests it is still rising. Even the Fed’s preferred inflation measure, the Personal Consumption Expenditure (PCE) index, which tends to track lower than the CPI, is reported as rising 5.8% in 2021, also a 40 year high.
As usual, the central bank’s remedy for high inflation control revolves around interest rate rises, and higher interest rates are considered negative for gold, in theory. However, this has not always been the case in practice.
The yellow metal generates no interest, so higher rates make other revenue-generating assets more attractive.

But the weakness vis-à-vis gold is that that is only the case if real interest rates are positive. Currently, inflation is running at a sufficiently high level, which means the Fed would have to raise the Federal Funds base rate enormously for this to come about.

Continuing negative real rates are thus positive for non-interest generating assets like gold, which tend to hold their value rather than having their value degraded by inflation.

The likelihood of the Fed raising rates sufficiently to achieve a positive real rate given the current high inflation levels is almost certainly out of the question. Something has to give, and one suspects that will put a ceiling on interest rate rises which will thus have to remain somewhere well below the point where real interest rates move out of negative territory for the foreseeable future! Another factor the Fed would need to take into account is that given the enormous debts which have been run-up in the past few years by the US, mostly to mitigate the economic impact of the virus pandemic, these still need to be serviced. High-interest rates make the debt servicing costs unsupportable without putting enormous strains on the Fed’s current account.

Even so, the consensus opinion following Powell’s press conference is that the Fed may now be looking at five or six interest rate rises this year, rather than the three or four which had been the forecast previously.
Either this or the prospect of fewer rate rises, but bigger ones instead.
The Fed usually raises rates, when it does so, in 25 basis point increments in order to judge the impact of relatively small rises on overall economic growth. There is now speculation that some of this year’s increases could be of 50 basis points instead. Thus the suggestion is now that interest rates could rise by the year-end by perhaps 1.5% or more. That is, in effect, a huge increase and would likely decimate equity valuations and perhaps even tip the U.S. economy into recession and, unless there is an unlikely enormous fall in the inflation rate as a consequence, this would still leave us with relatively high negative real interest rates which, of course, remains gold positive.

The recession likelihood is something the Fed seems to be putting aside in its deliberations for now, somewhat similarly to the Paul Volcker scenario of some 40 years ago when inflation reached far higher levels than are being seen in this latest surge. Whether such an economic dip is a politically acceptable solution - particularly with mid-term elections coming up this year - remains to be seen. That may be doubtful, but the Fed may well persist in its solution to the problem, if only to try to demonstrate its independence from the administration.

There has been considerable volatility in the markets post the FOMC meeting, and this is hardly surprising given the emotional reaction to all the conflicting advice being put forward by analysts and commentators. In reality, we suspect that when the immediate impact blows over, we will find little has changed, and markets will mostly return to previous levels. There will still be respected commentators predicting a massive market crash, while there will be others of a rather more bullish bent. What we do thus see is continued uncertainty ahead, though, and that tends overall to be positive for gold and silver, but rather less so for perhaps more speculative equities and bitcoin.

Even if the Fed, therefore, continues on this aggressive course to try and bring down inflation, we do reckon that the gold price will yet make a recovery and perhaps move on to higher levels, although this may take longer than previously forecast. We predict that gold may well retake the $1,800 level this week and silver perhaps surpass $23 again, some time this week or next. Precious metals investors should not be despondent. We suspect the status quo will return relatively rapidly whatever the Fed decides to do on interest rate rises.