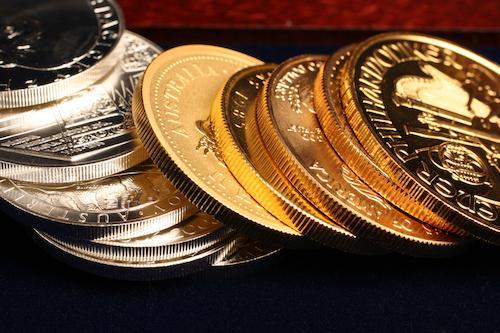 Friday saw something of a bloodbath in the markets following a late downturn on Thursday, particularly in the U.S., with equities, precious metals, bitcoin, and other commodities falling sharply in concert.

The U.S. dollar index (USDX) did rise on the back of perhaps the prospect of an above-average U.S. Fed interest rate rise at the early May FOMC meeting and that may have been directly responsible for some of the falls, particularly in precious metals, which typically move counter to dollar strength. The consensus opinion, which may have something to do with overall market sentiment, remains that the subsequent likely interest rate rise will be 50 basis points. However, a 75 basis point rise may yet be on the table.

Even a 50 basis point rate lift, if it is assumed, as current Fed chair Jerome Powell has indicated, that there may be further rises ahead of a similar magnitude throughout the year, may even be enough to spook the equity markets further. Indeed the prospect of this, probably already at least in part, led to the late Thursday and then Friday’s sharp U.S. equity market falls. In our opinion, though, even this level of rate increase will still be hugely insufficient to stem the rising path of inflation which is why, just perhaps, the more hawkish opinion of St. Louis Fed President James Bullard in calling for a 75 basis point rise at the May FOMC meeting in 2 weeks’ time, might find some traction among his colleagues.

Much may thus depend on the level of the Personal Consumption Expenditure (PCE) Index data release due on April 29th. The PCE is the Fed’s preferred inflation measure and usually comes in a couple of points below the CPI. The PCE Index data announcement at the end of March showed, for it, an unusually high 6.4% rise year-on-year up from 6.0% a month earlier.

This compares with the most recent CPI data announcements of an 8.5% year on year increase. If the next PCE announcement shows a 7% or higher figure for example it will ring enormous alarm bells, although one suspects that the way the index is calculated will keep it at least marginally below the 7% figure.

The latest Fed tightening program as forecast by Powell, is for the central bank’s bond purchasing program to be completed by mid-year and interest rates to be raised at successive FOMC meetings to reach 2.5%, or perhaps even 3%, by the year end. But with inflation possibly reaching double digit levels in the next couple of months, as the twin effects of the economic recovery from the Covid-19 pandemic and the indirect impact on global trade of the economic sanctions imposed on Russia over the invasion of Ukraine, continue to take effect, this is still probably insufficient to bring inflation under control. These moves may stabilize the situation but seem to this observer to be hugely insufficient to have any significant effect in bringing price inflation back down to the Fed’s 2% target level.

If the above is a correct interpretation of what will happen, then U.S. equities will continue to be negatively affected, perhaps strongly, and the U.S. economy will also likely turn down – maybe sharply. The R word, recession, may even come into the vocabulary. Real interest rates would presumably remain in negative territory, which is usually positive for non-interest-generating assets like gold and silver whose safe haven characteristics tend to be enhanced thereby.

The situation in the European Union (E.U.), where the European central bank is being even more cautious in raising interest rates to counter inflation will create additional pressures.

Where the U.S. economy goes, the rest of the world tends to follow. The inflationary strains of the sanctions on Russia, which will continue as long as the Ukraine war continues –and likely for longer given the degree of global ill-feeling towards Russia generated by the invasion and the seemingly indiscriminate attacks on the civilian population supposedly being ‘liberated’. These will be impacting European nations even more strongly than they will the U.S., as will the necessity of coping with the enormous refugee flows and other Ukrainian support costs.

The Covid pandemic also seems to be rearing its ugly head again in Asia, inflicting additional strains on economies there too. This will be affecting the supply chain for Chinese and South Korean goods being exported to North America and Europe in particular.

In short 2022 is looking to be a global annus horribilis - and we are only about a third of the way through the year so far. Traditional safe haven assets – the U.S. dollar for now, along with gold and silver - may yet prove to be the best wealth protectors out there. It’s probably sensible to stay away from the more speculative equities and bitcoin markets for the time being. These may not serve you well in such circumstances whatever their increasingly strident promoters may suggest to you. Still, they may do better as and when the global recovery eventually materializes. This may not be for a couple of years yet, though, when some of the adverse factors begin to drop out of the equation and, hopefully, the Russia/Ukraine war is just a memory.