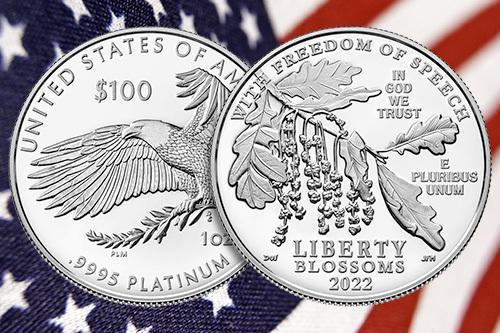 In 1997, the United States Mint “made numismatic history” when it released its first-ever legal tender proof coin made out of the alluring precious metal known as platinum. The newly developed Platinum American Eagle Proof, which was authorized by the United States Congress in 1996 and released for the first time the following year, holds the highest face value – $100 for the one-ounce version – of any legal tender U.S. coin (along with its bullion counterpart, which bears the same, essentially nominal face value).

In its now 20-plus-year history, the Platinum American Eagle Proof series has developed a reputation as one of the modern U.S. Mint's most renowned and design-centric coin programs. While the Platinum Eagle program's bullion issues bear the same obverse and reverse designs year after year, the proof iteration’s design evolves regularly – one of the program’s most defining characteristics.

With its 2022 release, the Platinum Eagle Proof, Freedom of Speech is the second coin in the First Amendment in the United States Constitution Platinum Proof Coin Series. As the series’s title implies, this new collection of designs aims to commemorate, celebrate and reinforce the ideals outlined in the First Amendment to the United States Constitution, namely the freedoms and rights explicitly protected therein: freedom of religion, freedom of speech, freedom of the press, the right of the people to peaceably assemble, and the right of the people to petition their government.

The new design series will run for five years, beginning in 2021 and ending in 2025, and will feature a new obverse design every year of its duration. Each design installment will epitomize one of the five protected freedoms and rights, as noted above. The 2022 proof coin will celebrate the second of these freedoms, the freedom of speech. Traditionally, it’s been the Platinum Eagle Proof’s reverse design that has changed year after year, but this new 2021-2025 slate of designs will continue the trend started in 2018, in which the coin’s obverse shapeshifts, while its reverse remains the same.

To commemorate these five freedoms and rights, the First Amendment series will call on the image of the oak tree, a popular motif in American symbology, over the course of its five-year duration to demonstrate how “[l]iberty grows to a thing of strength and beauty from a seed – our Bill of Rights,” and that “[e]ach of the freedoms enumerated in the First Amendment contributes to the growth and development of the Nation,” as the U.S. Mint explains. Each of the five designs will depict a sequential stage of the oak tree’s lifecycle, “from seedling to a mighty oak,” a progression that acts as a “metaphor for our country’s growth as a Nation that values freedom.”

The U.S. Mint will release its 2022 Platinum American Eagle Proof coin at noon Eastern Time on Thursday, March 3rd, 2022. Proof coins purchased directly through the U.S. Mint are not graded. However, clients of Wholesale Coins Direct will have the opportunity to add one of these platinum beauties, graded at the highest PF70 level, as deemed by the Numismatic Guaranty Corporation (NGC), later this month.

Each PF70 investment-grade coin purchased through Wholesale Coins Direct is accompanied by an exclusive certification label hand-signed by the 38th Director of the U.S. Mint, Edmund C. Moy. The Ed Moy certification label program, a unique feature offered only to Wholesale Coins Direct clients, has proven its investment value on the precious metals market time and again. Ed Moy-label coins' populations are relatively small compared to the broader PF70 or general proof supplies, adding a unique appeal to proof coins accompanied by the labels. Read more about the Ed Moy certification label program.

Since its launch in the waning years of the 20th century, the Platinum American Eagle has evolved into one of the United States’ most designed-focused coin programs. A defining feature of the Platinum Eagle Proof series is that its coins change designs regularly, making it a metaphorical chameleon compared to its gold and silver counterparts (which are only just set to be redesigned for the first time since their inaugural launches in the late 1980s).

Since its launch in 1997, the Platinum American Eagle Proof coin has undergone numerous design changes, many of which are grouped under a thought-provoking and profoundly American theme. These themed design chapters celebrate everything from our nation’s founding and guiding documents to our three branches of government to the awe-inspiring diversity of our country’s physical landscape.

Throughout the bulk of the Platinum Eagle Proof's tenure, these design overhauls were executed on the coin's reverse side. However, that pattern has flipped in recent years, with the obverse of the coin becoming the site of the alternating designs.

For its inaugural year in 1997, the Platinum American Eagle Proof bore a reverse image of a soaring American eagle set against an interstellar-looking background with a beaming sun cresting over the earth’s horizon.

The following five years, from 1998 through 2002, the Platinum American Eagle Proof reverse followed the Vistas of Liberty theme. Each year of this five-year design series brought a new reverse image to the Platinum American Eagle Proof that depicted an in-flight eagle soaring across a different American landscape – or “vista.” According to then-Mint Director Philip N. Diehl, the Vistas of Liberty theme was the “first time in history the Mint [had] embarked on a five-year design series for a coin.” By featuring a different aspect of the vast and diverse landscape that is the American terrain, Diehl continued, the Vistas of Liberty series profiled “the unique character and charisma of our Nation’s diverse landscapes, capturing the spirit and strength of America and its people.”

In 2003, the reverse of the Platinum American Eagle Proof featured an American bald eagle perched atop a Rocky Mountain pine branch. A waving U.S. flag is pictured behind the eagle motif, marking the first time the two American symbols were displayed together on a U.S. coin. The motif was designed by Alfred Maletsky, who was known for developing a variety of Platinum Eagle Proof and other coins throughout his career.

The 2004 and 2005 reverse designs were created by Artistic Infusion Program artist Donna Weaver. The earlier issue’s reverse imagery was inspired by Daniel Chester French’s sculpture, “America,” which is erected outside the U.S. Customs House in New York City. The image features a seated woman, presumably Lady Liberty, holding a torch in her right hand and balancing a bundle of corn stalks on her lap. A bald eagle sits on the ground atop an array of olive or laurel branches to her left.

Weaver’s 2005 design features an American eagle balancing atop a heraldic shield and olive branch, wings outstretched to either side, with 13 five-pointed stars overhead. At the base of the shield sits a cornucopia filled with bounty presumably harvested from the American land.

The Foundations of Democracy theme was launched in 2006. The series ran for three years, each year’s unique reverse design visualizing one of the three branches of the U.S. government – the legislative in 2006, the executive in 2007, and the judicial in 2008.

The Preamble to the Constitution designs were struck from 2009 through 2014, representing one of the guiding American document's tenets with each of the series’s installments. The first coin of the themed series, released in 2009, represented the American people’s ongoing quest “To form a more perfect Union.” This initial coin was followed by five additional issues, each representing another endeavor outlined in the Constitution’s Preamble, from insuring “domestic Tranquility" to securing “the Blessings of Liberty to ourselves and our Posterity,” and all those in between.

The following theme, Torches of Liberty, ran in 2015 and 2016 and featured modern portraits of Lady Liberty designed to represent the United States’ core values of liberty and freedom. In 2015, Liberty was shown in almost divine fashion, standing atop a structure that looks to stretch into the heavens, reaching her hand out gently toward an American eagle perched on top of the entire earth. She holds a flaming torch up high with her other hand as the sun beams brilliantly behind her.

The 2016 Torches of Liberty motif features a strikingly ethereal Lady Liberty, who appears to be floating either in water or in air. Again, Liberty clasps a flaming torch in her right hand, and this time, grazes a sizeable olive branch with her left. She looks endearingly over her right shoulder at a magnificent American eagle as it flies determinedly behind her.

In 2017, to honor the proof coin’s 20th anniversary, the coin's reverse image was struck in its original 1997 form – again featuring an American bald eagle soaring gracefully above the earth's horizon, sun beaming behind its outstretched wings.

For the Platinum American Eagle Proof’s first 20 years, from its launch in 1997 to its 20th installment in 2017, the coin had been struck with a common obverse design depicting an up-close rendering of the Statue of Liberty, and the various reverse designs, as outlined above. In 2018, for the first time in the coin’s then 21-year history, the Platinum Eagle Proof underwent a design overhaul for its reverse and obverse sides. For its new three-year series, Preamble to the Declaration of Independence, the Platinum American Eagle Proof bore a new design on its front side, each representing one of the "unalienable Rights" guaranteed by the Declaration of Independence: Life, Liberty, and Happiness. The coin bore a common reverse design for the three-year run that featured an American eagle in descent, carrying an olive branch in its talons.

With each new design series, the Platinum American Eagle Proof program invites investors, coin enthusiasts, and the general populace alike to take a moment to reflect upon the storied and profound history of our great nation. The 2021-2025 First Amendment series is undoubtedly another great reminder to pause and commemorate the ideals espoused by our country’s founding documents – the very ideals we, as the American people, continue to struggle and strive for year after year, generation after generation.