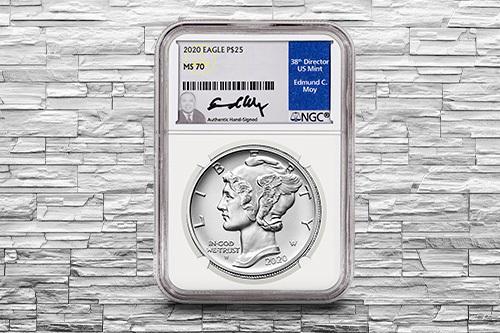 Released from the U.S. Mint on September 24th, the 2020 installment of the Mint’s Palladium American Eagle series. The coin has a mintage limit of 10,000 coins, a product limit of the same amount, and an order limit of one coin per household. These highly anticipated coins are available now.

For the first time, the 2020 Palladium American Eagle One Ounce coin will be produced in a striking Uncirculated finish. Since its launch in 2017, the Palladium Eagle has been issued in Bullion and Proof iterations, so this year’s Uncirculated finish marks an exciting evolution in the coin’s relatively short history.

According to the U.S. Mint, “the term uncirculated refers to the special coining process used to make the coin, which gives it a brilliant finish.” Uncirculated coins are produced via the same general methodology as their circulating counterparts, save for a few additional measures to enhance the finished product's quality. Such additional measures include employing a "slightly higher coining force, early strikes from dies, special cleaning after stamping, and special packaging,” as the Mint points out.

Just like with Proof coins, Uncirculated coins can be graded and, as a result, may enjoy potentially higher long-term values based on the item’s overall quality. Coin grading is a process through which an independent industry authority like the Numismatic Guaranty Corporation (NGC) assesses a coin on a variety of quality metrics such as image clarity, the magnitude of surface blemishes, and strike quality, and issues a score based on the coin’s performance in the specified assessment areas.

NGC employs the industry-standard and internationally accepted Sheldon scale to assess coins and issue grades. The Sheldon scale – a 70-point numeric rubric – was developed by American psychologist and numismatist, William Herbert Sheldon, in 1949 and has been used by NGC since its founding in 1987. Coins receiving a grade of 1 on the Sheldon scale, according to NGC, retain "enough detail to identify the coin's date and type," but its rims are “nearly flat.” On the opposite end of the spectrum are perfect-score 70 coins, which NGC notes have “no post-production imperfections at 5x magnification.”

Like their Proof counterparts, coins that the U.S. Mint calls “Uncirculated” are assessed on the Sheldon grading scale, with 70 being the highest possible grade. Coins of this type that score at least 60 receive the label “Mint State,” with the highest grade being abbreviated as “MS70.”