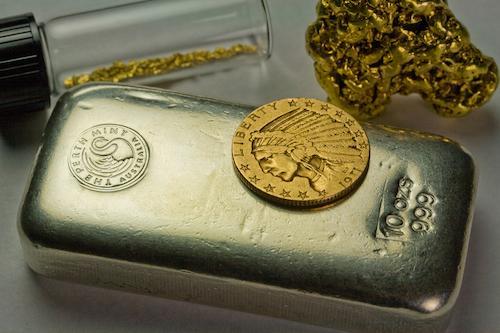 The U.S. Federal Reserve Bank (The Fed) has spoken. Its proposed remedies for the current high inflation scenario were not nearly as downbeat for precious metals as the markets suggested. Certainly, the proposed solutions are likely to be more aggressive than before, but this had been mostly discounted in precious metals prices beforehand, and the post-Federal Open Market Committee (FOMC) statement by newly re-nominated Fed chair, Jerome Powell, although more ‘hawkish’ in tone than before, was not sufficiently so to prompt a major gold and equity market downturn as many had been predicting. Indeed the outcome had largely been foreshadowed in a pre-meeting statement by Powell to Congress, which had stated that the term ‘transitory,’ which the Fed had previously applied to the likely progress and duration of inflation, was no longer relevant.

As this writer has previously noted, the Fed has always tended to err, if anything, on the side of caution. Thus, the impression which came out of the FOMC meeting was that, although we would likely be seeing more rapid tapering of bond and mortgage security purchases – inevitable – and a slightly more aggressive interest rate raising program, this latter was not going to be quite as severe, or as rapid, as the markets had been predicting.

Although exceeding the $1,800 mark in Europe and early U.S. trade on Friday, gold was still not allowed to end the week above this mark, though, and fell back to $1,798.7 by the close. Consequently, a broad sigh of relief resulted in a precious metals price recovery, taking gold back to the $1,800 mark and no severe downturn in the equity markets, but was heading upwards again, but cautiously, at the beginning of the current week.

The FOMC deliberations suggested an increase in the size of the tapering program which is now scheduled to be completed in March as had been much anticipated. However, many had assumed that this would lay the path open for an immediate raising of interest rates thereafter, and there was no indication that this would necessarily be the case. Powell predicated any decision for raising rates on the employment level reaching its target of around 3.5% - it’s not quite there yet – and presumably also with one eye on the potential economic effects of the spread of the seemingly highly transmissible Omicron Covid-19 virus mutation, which we see as having a severe impact on U.S. infections, if not on deaths, as we are currently seeing in the U.K.

The potential effects of the new virus mutation should not be underestimated if its rapid impact on European virus infection figures is anything to go by. In a matter of a few days it looks like replacing the Delta variant as the predominant virus strain in Europe, and it is already present in the U.S. While initial indications are that its effects may not make people quite as sick as previous variants, it is too early to say for sure, and its likely spread will already be putting severe pressure on the stretched hospital system.

There is still, though, a seeming reluctance of a significant part of the U.S. population to undergo vaccination, despite solid evidence that Pfizer or Moderna booster jabs seriously reduce the chances of severe infection and deaths. As a result, the Omicron variant virus spread could be dramatic should it gain hold – which by past patterns is almost inevitable.

The U.K. experience of Omicron to date is salutary. Infection rates with the Omicron variant are more than doubling every couple of days, despite the fact that the U.K. has one of the highest vaccination and testing levels in the world. Other European nations, notably France, Germany and the Benelux countries, are already seeing high levels of infections and hospitalizations. Still, these nations all have far lower virus testing rates than the U.K., so the real figures there may even be far higher in comparison.

The above is a slight but highly relevant digression. The FOMC recommendations give the Fed a little breathing space before it needs to make a decision on its rate raising program and more clarity may come out of the January FOMC meeting at the end of next month. At the moment the Fed is looking at three 25 basis point interest rate increases in 2022 and a further three rate hikes in 2023 and a two in 2024. Altogether this would make for an anticipated total rate hike of around 2% by end-2024. Of course, this is all subject to economic data and the state of the U.S. economic recovery between now and then.

Assuming the inflation rate stays at its current level or even rises further as seems likely before it starts to come back down, the above would likely leave real interest rates in distinctly negative territory. This would normally be positive for a non-interest rate generating asset like gold so there could still be further upwards movement in the yellow metal’s price by Christmas and the New Year. I still think that barring any forthcoming data that seriously suppresses the gold price that it could yet attain the $2,000 level again sometime during 2022, with a slight change in perception towards precious metals having become apparent, coupled with seeming current nervousness in equity prices and bitcoin.