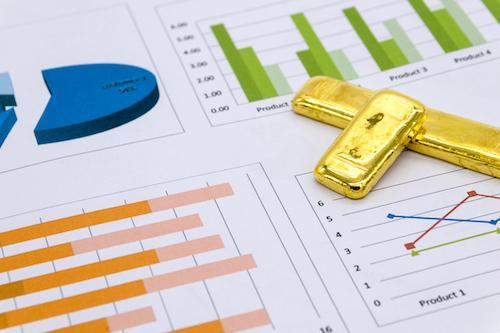 The World Gold Council (WGC)’s latest “Gold Demand Trends” report was published at the end of July and now that we’ve had a little time to digest the statistical data, we’ve drawn our own conclusions from it.  It sets a reasonably positive tone on global gold fundamentals, noting that both demand and supply rose in Q2, in relation to Q1 figures, although demand remains pretty much flat year on year.

With global newly mined gold production expected to fall in the medium to long term, given corporate cutbacks in mineral exploration and new capital project expenditures, the overall pictures for gold’s fundamentals and the consequent metal price look to be broadly positive.  We would point out here that although the supply-and-demand balance looks to be favorable for the gold price, we would anticipate any likely price rises to remain modest.  This would, thus, totally rule out the kinds of mega price increases beloved by some of the more optimistic commentators who chase headlines – many of whom have been preaching the same massive price increase scenarios for many years, without those increases showing any serious signs of coming about.

It’s not so much that these $5,000 or $10,000 price levels are impossible, as they will likely come about in the fullness of time through natural progression and price inflation – but not for many years yet.  If they should occur in the short term, then the likely scenario under which they might come about is likely too horrific to contemplate.  Your wealth might be protected under such circumstances, but you might not want to be around under such circumstances!  Be careful what you wish for.

While the WGC is an entity financed by the gold mining industry, we should point out that the statistics it presents in its reports are researched and supplied by independent precious metals consultancy, Metals Focus, in addition to other reputable sources, where applicable. The analysis and information presented in the reports  should thus be considered unbiased.   However, the WGC may present somewhat partial conclusions in its own resultant comments, although it does its best to remain balanced in its assessed outlook.

Delving deeper into the WGC figures, it is apparent that some traditional demand elements are indeed picking up nicely, as parts of the world start to exit from COVID-19 related restrictions.  Indeed, it could be said that the world has survived, so far, much better than we might have anticipated when the virus began its worldwide spread.  Even so, cases driven by the new, apparently more infectious Delta variant are rising – notably in the U.S., where new cases have recently soared to nearly 120,000 to above 130,000 daily (depending on the source and counting method looked at), which has to be worrying for the Biden administration, in addition to also undoubtedly casting a shadow over the economic recovery there.

According to the latest WGC figures, gold jewelry and investment demand both seem to have been performing strongly.  Central banks have again been net purchasers with particularly big increases having been recorded by Hungary, Thailand, and Brazil in Q1, alongside good cumulative monthly demand from India, Kazakhstan, and Uzbekistan. The big gold ETF outflows seen in the second half of 2020 and in Q1 2021 have turned around, with net inflows slightly exceeding outflows. This inflow-outflow ratio had been a major contributory factor to apparent gold price stabilization in the low $1,800s, although the price has suffered a substantial downturn in the past few business days, falling back to just below $1,740, at the time of writing.

The writer suspects this is a fall too far, too fast, as it doesn’t seem to be justified by what is being seen as a number of positive factors for the gold price moving forward toward recovery.  But there are powerful vested interests that might benefit from a lower gold price – not least of which are those holding big short positions on COMEX - so a price rise is unlikely without quite a battle developing.  However, we do see market forces winning out in the medium to long term, so the recent gold price falls might be seen as a great buying opportunity.