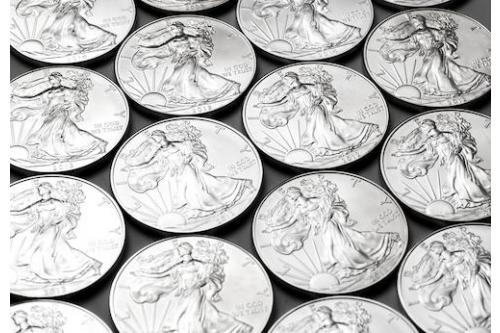 Silver is probably the most contentious of the precious metals, in terms of price forecasting.  There are those who are adamant that the metal is hugely undervalued and the price is due for a massive imminent take-off.   Meanwhile, there are some doubters out there with very much the opposite opinion, who feel that even the current price level is still vulnerable to a sharp fall.  Both camps present strong arguments to support their widely differing opinions.  However, as with gold, long-term performance has tended to strike a medium falling between the viewpoints, although as the silver investor will have noted, the price of silver does seem to be far more volatile than that of its yellow sibling.

Investing in silver is therefore rather more of a gamble than investing in gold.  Its principal demand nowadays is from the industrial sector and seems to be ever rising, given its photo-electric properties, which makes it a key element in the construction of solar panels – a hot industrial sector at present, given a global emphasis on trying to counteract global warming through “green” energy provisions.  But there are other hugely significant uses of silver in the electronics sector (it is a highly efficient conductor of electricity) and in the medical sector, given its strong anti-microbial properties.  These use cases, coupled with digital photographic developments in recent years, have very much replaced photographic demand for silver, which used to be the metal’s main industrial usage (although it still remains an important sector for silver). Of course, there are the jewelry and investment sectors also providing huge demands for silver.

It is this combination of silver being very much both an investment metal and an industrial one on which the silver bulls tend to base their supply and demand arguments.  To this day, silver supply-and-demand fundamentals remain an extremely contentious issue.  Unlike gold, where, in theory at least, a shortfall in supply could lead to increased mining output (were it not for peak gold, which is another contentious subject), there are few primary silver mines – most of the metal is mined as a byproduct of base metal and gold mining, so supply levels tend to be unrelated to the silver price itself.

So, silver price forecasting is a pretty invidious task.  Chantelle Schieven, of Murenbeeld & Co., in conjunction with Dr. Tom Brady, has been instrumental in launching the consultancy’s Silver Monitor newsletter, under the Capitalight banner (Capitalight is Murenbeeld & Co.’s parent company), to accompany the longstanding Gold Monitor, which offers some of the best gold analysis and forecasting available.  Silver Monitor is not published weekly like Gold Monitor, but the second edition has just appeared, with its forecasts for the silver price for the next couple of years. Like the Gold Monitor forecasts, the Silver Monitor comes up with three potential pricing scenarios and gives a weighting to each of them, from which it calculates a median forecast of quarter-by-quarter average prices, up until Q3 2022.  See below:

The three scenarios are: A – bearish, which is given only a 15% to 20% weighting; B – most likely, 60% weighting; and C – bullish, 20% to 25% weighting. The probability-weighted forecast puts silver as averaging $32.20 an ounce by Q4 this year, rising to close to $40 by the end of 2022.  The writer feels this may well be a little high, given silver’s performance to date this year – but, as noted above, silver is volatile and it is early days yet, so such a strong price advance certainly can’t be ruled out.

There are any number of possible eventualities that could drive the silver price up to this kind of level.  The writer’s personal view, though, is that he would not be too surprised if silver stays below $30 up until at least the year’s end, unless there is another attempt at instigating a short squeeze in the market, as we saw conducted, unsuccessfully, around a month ago.  There are plenty of reasons why such a repeat effort is unlikely to succeed.

Scenario C is the most bullish in its projections, but we feel that, given the current silver pricing situation, it is probably less likely to occur than its 20-25% weighting would suggest.  But overall, the Silver Monitor analysts remain bullish in their outlook for silver prices. Driven by continuing low interest rates and improved economic growth, they do still expect further gains, with prices averaging over $32 per ounce during the fourth quarter of 2021.

In this new Silver Monitor, the authors also note that the headwinds that have kept the silver price on a sideways trend since the end of last year are likely to dissipate slowly, though, as the world economy transitions from last year’s COVID-19 induced lockdown environment to a more normalized post-COVID-19 situation – if that indeed can be achieved, even in the U.S.  It seems perhaps unlikely that some parts of the world – notably Central and South America and Africa, and even maybe parts of Europe – will recover from the pandemic as quickly as the U.S., particularly given slow, or non-existent, vaccine rollouts.  Even in the U.S., though, with some states easing pandemic restrictions, perhaps prematurely, in attempts to kick-start their economies, there could easily be a resurgence that could slow down the return to normal – although, this could actually enhance silver’s price prospects.  However, the vast strides the U.S. is making in rolling out vaccinations will be helpful for economic recovery prospects, although, there is still a great deal of anti-vax propaganda and sentiment out there, which could slow things down again.

As analytical consultancies go, we do consider the Capitalight/Murenbeeld entity one of the most consistently accurate, and realistic, out there – at least as far as their gold price analysis is concerned.  It obviously remains to be seen whether the same confidence can be given to their silver price analysis, but undoubtedly, the research will be conducted with the same degree of due diligence as their gold analysis.  However, it should be recognized that silver is a more unpredictable metal, both with regard to the upside and downside, so only time will tell whether the Silver Monitor can match the Gold Monitor in its accurate analysis and forecasting.