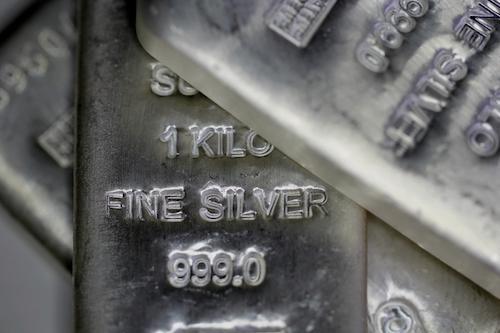 While gold has largely held its own of late, albeit at a lower level than the gold bulls feel is apposite, the same can perhaps not be said of silver with the Gold:Silver ratio heading back to over 80 and the actual silver price slipping below the $22 level, albeit briefly. There are those who are bullish on the silver price out there who seem to believe that silver bullion is in reality in potentially massive short supply and see a significant price pickup ahead, but there is little supporting evidence of this in terms of price movements in the silver futures markets. Other observers strongly dispute this silver deficit view.

The silver market is a relatively small one compared with gold – and even more so when set against many other asset classes. This has led to the opinion that the market's small size makes the metal particularly vulnerable to price manipulation – particularly by the big bullion banks. Some of these banks, but not all, seem to be building up vast inventories of silver bullion while holding significant simultaneous short positions in the futures markets.

The theory on this from some silver analysts is that the big silver holdings will make these banks huge profits if, and when, the price is let rip, although this may be wishful thinking.

Silver has always been prone to such theories, and so far, moves to drive the price much higher have invariably seen a corresponding price surge, followed by a crash back down – often to lower levels than those from which the surge started. The 1980 Hunt Brothers attempt to corner the silver market, and the big silver price rise of 2011, both of which took the silver price up to around $50, are cases in point. In both cases, the silver price came down very sharply thereafter. Silver investor beware. Traders don't sometimes refer to it as the devil's metal without reason.

As I see it, silver demand nowadays is largely industry-driven. Its monetary usage has mostly fallen away, although some major mints continue to produce silver coins with prices based on the content of contained silver. This is something of a sop to the investment sector, making it easy for individuals to build up silver bullion holdings – but usually at a fairly high premium to the silver price at the time of purchase.

While silver often moves up and down pari passu with the gold price, this should probably no longer be the case, given that the metal has largely lost its monetary attributes.

Meanwhile, gold remains very much a monetary asset and certainly would seem to offer better safe haven and wealth protection properties than silver.

The future for silver - where supply is relatively inelastic, due to a dearth of primary silver mines with most metal produced as a by-product of base metal and gold mining - is, therefore, in my opinion, in industrial demand growth.

This may well see silver begin to move into an eventual supply deficit situation as its primary usage tends to be in growth sectors of the economy, but this will take a fair amount of time before there is a significant price impact.

As examples of silver's industrial potential, it has a number of properties that are extremely promising in its usage in industry. Among all metals, silver is a top thermal and electrical conductor, both malleable and ductile, which is a valuable attribute in electronics and some other industrial applications. In the medical sector, too, it has usage as an anti-microbial and non-toxic metal and is beginning to be used in the home as well, often because of its biocide properties.

Apart from the jewelry industry, which remains perhaps the biggest market for silver, its other principal market used to be in the photographic sector. The advent of digital imaging has superseded it in large part of this industry. However, the metal's light-sensitive properties give it continuing usage in this market – particularly in producing x-ray images, which continues to be a major demand source for the metal.

Silver's photovoltaic properties have also opened up a vast new market in solar panel manufacture for converting sunlight to energy, which probably now accounts for up to 20% of global industrial silver consumption. This is truly a major and continuing growth market for the metal, given the enormous push to phase out fossil fuels for electricity generation.

But these are just a few of silver's potential industrial uses. It is utilized in a number of seemingly surprising industrial sectors like the automotive industry, long-life micro battery manufacture, 3D printing, media storage. At the same time, its biocidal properties have opened up several household uses and utilization in water purification, laundry detergents, and wood preservatives. Undoubtedly there are other areas of industrial usage for silver too.

There is potentially a huge market opening up in the electric-powered vehicle (EV) market – not only because of silver's usage in the electronic circuitry that will be hugely important but also with potential in battery technology. For example, Samsung engineers in Korea claim to be developing a solid-state battery for EVs in which silver is a crucial component, admittedly in tiny quantities.

Numerous companies worldwide are immersed in developing a commercial solid-state battery and silver could be a potentially important part of this research.

More conventional silver oxide batteries have already demonstrated substantial advantages over lithium-ion ones at a small scale in such applications as quartz watches and mobile phones in terms of run times. They are being researched as an option for conventional-type battery power in EVs, let alone perhaps, the longer-term potential in solid-state batteries. If silver can take off as a crucial part of EV technology, an enormous demand sector could well open up.

Silver thus has attributes that should mean an ever-growing number of potential industrial applications, which should see demand continuing to build, so, by all means, invest in silver for the long term. You may also benefit from occasional price surges in the meantime. Some silver investors tend to be ultra optimistic and drive prices up strongly from time to time, although they usually come back down again. Investing in silver may thus not be as much of a sure thing in the short term as many who promote it as an investment might suggest. Still, ongoing research could give it substantial long-term potential, mainly if it were to become a key component in the potentially massive EV market.