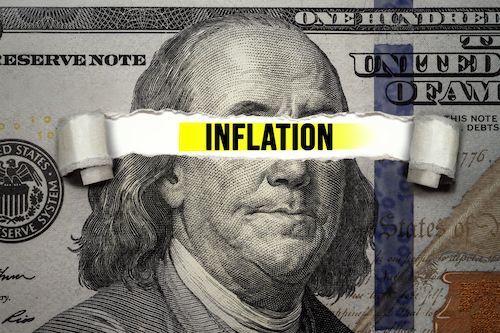 A month ago, some people were saying the weak Rouble was evidence of the demise of Russia and their inevitable defeat in the war with Ukraine. Now that the Rouble has strengthened considerably, some of the same people say the strong Rouble is evidence of Russia’s demise and still predicting defeat for them in the Ukrainian conflict. While time will tell and conflicting reports abound, the objectives Russia announced for the conflict are nearly complete. At the same time, the rest of the world (including the US) struggles with higher energy prices and a slowing economy. While interest rates are rising here in the U.S., they are falling more than expected in Russia, even as their currency strengthens further. What could be causing the Russian Rouble to levitate in light of so much opposition? A proposed connection to gold.

Even the proposed connection of the Rouble to gold mentioned above is difficult to discern, with many Western press outlets using headlines and narratives of those opposed to the idea as the primary source for their articles. Meanwhile, the President of Russia and official Kremlin sources indicate a legitimate proposal. If approved, the Russian currency had a direct link to gold since abandoning the practice during WWI, over a century ago. Following the announcement made yesterday by Federal Reserve Chairman Jerome Powell concerning the 0.50% interest rate hike (largest in 22 years), gold and silver are higher this morning in early trading. Even though interest rate hikes are thought to be negative for gold, projected prices are rising while already near record highs in other currencies worldwide.

While the Federal Reserve claims to be fighting inflation with the federal funds rate now floating in a range of 0.75% to 1.0%, the government’s own inflation-linked Treasury securities currently offer an interest rate of over 9% to help motivate savers to partake. Aggressive Fed watchers expect the federal funds rate to rise to 3.0 - 3.5% by year-end to slow inflation. That is a large gap between those two rates and seems to indicate that financial conditions are conflicted here in the United States and worldwide. Not many know that U.S. Savings bonds (I-bonds) are currently paying 9.62%, but they are. I-bonds come with many restrictions and are limited to the quantity available and types of accounts eligible to investors. Thankfully a similar result can be achieved by simply owning gold without the same restrictions and limitations.

Often the inflation rate acknowledged by the government (now you know to look at the I-bond interest rate) helps to influence the amount they offer pensioners, veterans, and other government retirees via Cost of Living Adjustments (COLA), added annually to Social Security payments. Even with the latest COLA being the highest in 40 yrs, higher inflation rates this year suggest that next year’s COLA could be even higher. The problem is that purchasing items often rises faster than the COLA added to people’s pensions. We maintain owning gold has provided better protection for our savings than COLAs have done for our income.

Owning precious metals is a great way to protect your savings and purchasing power throughout your life, those you care about. Since COLA was introduced in 1975, the average increase has been 3.68% added to pensioners’ checks each year. Over the same period, gold has averaged 7.18%, and silver 12.45%. Unlike the I-bond mentioned above, you can purchase gold or silver in any quantity and for almost any account, including retirement accounts. Also, like an I-bond, the unrealized gains from owning gold or silver are not taxed from year to year and are tax-deferred until deciding to sell. Transferring physical precious metals to family members or other beneficiaries is a private and straightforward process without allowing hackers to disrupt or steal the information or metal electronically.

One difference between owning physical metal vs. accounts that can be hacked electronically is physical security. Assets held in accounts are usually protected from physical theft. In contrast, physical gold and silver should be stored safely in an insured private vault, available at the Texas Bullion Depository. This helps keep your family safe from would-be thieves during seasons of societal unrest or economic stress. Self-storage is also possible but fraught with other dangers. Both sides of my family owned precious metals in years past; one side discreetly kept track of them and passed them on to the next generation. Unfortunately, the other side failed to pass the information on to the current generation about where the metals were stored, and their whereabouts remain unknown. Using professional vaulting services helps avoid this issue, as statements are routinely available for authorized users.

Gold and silver have been around for a while and have outlasted every other currency man has created. Since time immemorial, they have helped preserve wealth for the wealthy and purchase power for the masses. They seem to have developed immunity to the viruses of physical war and conflict, financial conflict, and the plague of misinformation. Traditionally, the oldest civilizations have a strong affinity for gold and silver as the savings mechanisms of choice. The existence and endurance of nations, families, and dynasties are related to owning gold. Even the governments of relatively new nations, such as the United States, hold massive amounts of gold in reserve, exceeding 261 million ounces or over 8,000 tons.

Why would we be holding that much gold if it wasn’t essential to preserving the financial sovereignty of our nation? Even with record amounts of debt outstanding, the Dollar has continued to strengthen against most other world currencies, except the openly discussing a formal connection to gold. Over time, even the mighty Dollar has lost value against gold and silver. Regardless of who turns out to be right about the Russia-Ukraine conflict or the Federal Reserve Interest Rate policy, the owners of precious physical metals will be rewarded with purchasing-power protection for years to come.