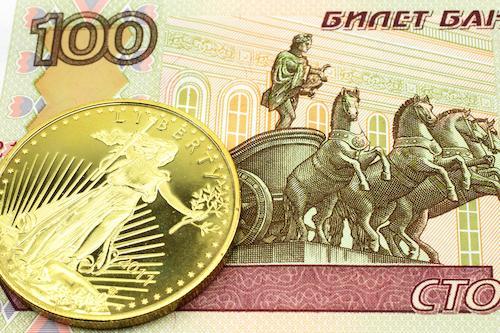 Russia has announced that its central bank will resurrect its gold buying program from the past weekend. Ostensibly this is to support the nation’s economy in the face of primarily western-imposed economic sanctions, which seem to be taking effect- perhaps quicker than anticipated. Already we see queues at cash machine ATMs as credit card transactions are no longer working, the ruble is diving in value against other currencies, there are fears of runs on banks, and the central bank has more than doubled the interest base rate to 20%.

Russia is the world’s second or third-largest gold producer, with Australia disputing this positioning, with both countries producing over 300 tonnes (metric tons) of gold annually and closing the gap with the world’s No.1 – China. The Russian central bank had been buying around 200 tonnes of gold a year until April 2020. Still, the horrendous drop in the oil price – Russia’s then major export earner – had led to the bank ceasing to buy in gold, thereby persuading its gold miners to sell their product on the international market and thus help prevent the enormous decline in the country’s current account caused by the fall in oil revenues.
In this, it was hugely successful, and with the oil price recovering substantially since then, its international payments balance had been moving well into positive territory. This had prompted us to suggest that the central bank might resume its gold buying program, with its oil sales keeping the current account healthy.
But this did not happen until now. We suspect that the Russian invasion of Ukraine and the consequent imposition of the stringent economic sanctions by the West have hugely changed its position in this respect.

If Western-imposed economic sanctions have effectively now prevented Russia’s gold miners from accessing international markets for their gold sales, then we had already speculated in a recent article that this would re-open purchases of Russian-produced gold by the central bank to boost its gold reserves, perhaps by as much as the +/-200 tonnes a year it had previously been purchasing which would have a substantial positive impact on announced global central bank gold purchases. These had seemed to be waning by the markets, but the logic had seemed to us for the central bank to re-commence its gold purchases to compensate for any fall-off in international gold sales earnings – and now it has announced it is going to do so.

Russia is already the world’s fifth largest national holder of gold in its reserves in terms of figures reported to the IMF, and a re-continuation of the 200 tonne/year purchase levels could see it rapidly overtake France and Italy in the gold reserve league table bringing it up to third place behind the U.S. and Germany. Of course, if China has been reporting its true gold reserve holdings, which many doubt, feeling they may be far higher.

The very sharp decline in the ruble's value will also enhance gold buying among the Russian investment community, who will be looking for a much more stable wealth protector. Holding U.S. dollars – another typical safe-haven investment - might be seen as un-Russian and pro-American, which could bring unwelcome attention from the Russian authorities, but holding gold – one of Russia’s principal natural resources – might be seen as country-supportive.

If Russia’s gold miners are excluded by sanctions from selling the rest of their output on the international market, we could go further in suggesting this amount might find its way into China, which is not party to the imposition of the Russian sanctions. Such direct imports into China would not necessarily be reported. They could well find their way into firm hands there, thus reducing global gold availability, even more, thereby tightening the market further.

In our view, this will all enhance our positive view of the gold market in the future. In the U.S. and Europe, the likely raising of interest rates to combat rising inflation, which will only be exacerbated by the sanctions imposed on Russia and the likely halt on Russian oil and gas supply purchases by the West, will not go far enough, or be fast enough, to drag real interest rates into positive territory. Negative real interest rates, which could thus remain with us for many months, if not years, enhance the investment attractiveness of zero rate assets like gold.

In short, gold seems to have much going for it as an ongoing investment and, hopefully, will continue to grow in value in the months and years ahead.