Are Russia and China Both Hiding Gold Reserve Increases? 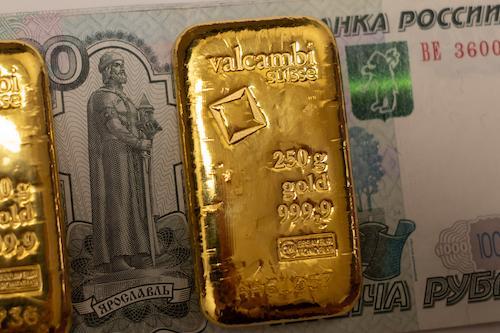 Are Russia and China Both Hiding Gold Reserve Increases?

Russia may now be joining China in remaining reticent about possible changes in its gold reserves. As readers may be aware, the Russian central bank had been the largest monthly regular purchaser of gold for its reserves up until April 2020, when it announced it was ceasing to add to them for the time being.

At that time, it was presumed that the abrupt policy change, which had seen it build its gold reserve to the world's fifth-largest national holding as reported to the IMF, was for the balance of payments reasons.

Russia's principal export earner had been oil and natural gas, mainly to Europe. The gas flowed through a couple of significant pipelines, but a massive dip in prices for these essential energy resources had meant that the nation's current account had not been keeping up with its financial needs. Russia is the world's second or third-largest gold producer, depending on what is included in these calculations, so the fall in value of the national current account could quickly be replaced by persuading its gold producers to sell most of their gold on the international market instead of to the Russian domestic banking system and indirectly to the Bank of Russia,.

In this it was hugely successful and was able to keep its current account in distinctly positive territory, which will have helped it finance the subsequent Ukraine attack. But oil and gas prices have since recovered all of their lost ground, and more, and eventually the country's central bank announced, just over a month ago, that it would be resuming its gold purchases. With the central bank having in the past regularly released updated foreign exchange (forex) data, of which its gold reserves were a major part, on the 20th of each month, the new figure for February – the first month the new policy was in place, was eagerly awaited this past week.

But this was not to be as the government and central bank appear to have started to be coy about this data, no doubt in part as a result of the latest military confrontation with Ukraine and the role its gold reserves might play in alleviating the stringent economic sanctions program that had been imposed by the West.

According to Ed Steer, who regularly publishes this data in his newsletter to subscribers, the latest.xls file that normally holds that data, was blank...except for the following comment..." International reserves as of February 18, 2022 accounted for $643.2 billion. These data will be used in all publications in the next three months from February 18, 2022." This suggests that any rise in the nation's gold reserve data will remain obscure, probably until after hostilities in Ukraine are brought to a close – or perhaps until Western economic sanctions are lifted or reduced. We will thus have to wait and see what, if anything, in terms of clarification, materializes in the weeks and months ahead.

The Russian central bank's purchases between 2014 and 2019 had been averaging around 200 tonnes a year so had been quite significant in the context of global central bank gold additions over that period of time. If the country's gold purchases are reverting to this kind of level, the Russian Federation's gold reserves will quite rapidly overtake in size the reported holdings of Italy and France, leaving Russia in third place globally, but still behind the US and Germany.

Of course, this all assumes China's reported gold reserves are at the level claimed. That country is both the world's largest producer of gold and the largest importer and, in the past, has been far from transparent over its true gold reserve totals.

Some estimates put China's gold reserve far higher than its currently reported level - indeed some think the Asian nation and world superpower probably already holds more gold than Germany, and possibly as much as the US, with additional holdings held in accounts it claims do not have to be reported to the IMF.

We have suggested in the past that there are some big amounts of gold in the hands of Chinese state-owned banks which could be switched into direct government control if seen as expedient. Also in a strongly regulated society like China, gold held in private hands, which is thought to be considerable, could be relatively quickly redirected into state holdings if that was thought to be in the national interest. But the question should perhaps be asked as to why central banks like those of Russia and China view gold as such a significant constituent of their reserve totals?

Partly because of gold's long history of being such an important global monetary asset, so financial credibility comes into play. Countries with bigger gold reserves tend to be seen by the world economic community as being more stable economically in the global context.

There is a widely held assumption that at some stage in the near future there will be something of a global financial reset with the US dollar's dominant position as the world's principal reserve currency coming under challenge. Countries like China and Russia in particular are jealous of what they see as the huge advantages that have accrued to the US in world trade due to the existing dollar dominance. They don't necessarily look to direct replacement of the dollar as the global reserve currency by their own, but do see perhaps a change to more of a package solution, with gold as an important element in this.

In this respect, gold is seen as a hugely significant strategic asset, with no counter-party dependence and as a store of globally accepted wealth well suited to global financial management and a reliable value store over time. In other words, it meets a central bank's principal role of helping provide long term safety and liquidity even if it does not generate interest but does tend to retain its overall value while currency holdings can fluctuate in this respect.

Thus, gold is generally considered a strategic asset that can be deployed for both short-term liquidity management and as a store of value over time. It is considered virtually immune to rising economic and political risks associated with other reserve assets. It is also supported by negative real and nominal interest rates; structural changes in the international monetary system; and the move towards de-dollarization by a number of global central banks. If central banks see all this as a long term reason for holding gold, then perhaps you should too!