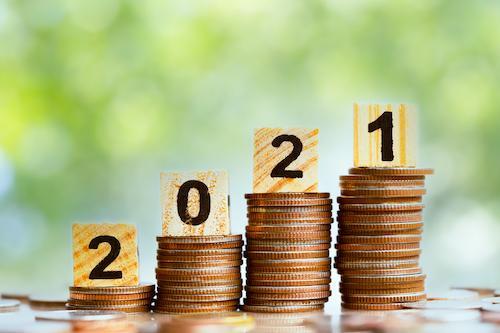 However, one thing is for certain.  It will still be a very long time before the virus pandemic is eradicated – if indeed it ever is.  So much will depend on the continuation of government-instituted controls to try and allay the virus spread, and protect the hospitals which, in many countries and U.S. states, are coming under intense pressure.  Monetary stimulus measures put in place in order to allay the virus's effects on the more vulnerable parts of the economy, and the continuance of such measures, will also be hugely important for both equity and precious metals markets.  Can any government keep on supporting the economy with substantial monetary stimulus ad infinitum? Without unleashing potentially severe inflationary pressures on the economy, I don’t think so.

There may now be a little more political certainty over the likely policies of a new Democratic Party-led administration now that Joe Biden’s path to becoming the U.S. president seems to have been confirmed by the Electoral College, although President Trump has still not conceded.  The latter’s support among Republican hard liners seems to be fading at least a little and a more consensual approach to governance seems to be emerging.  But much will depend on whether this is more than just a temporary illusion.

A Biden administration will be rather less dismissive of medical advice – but again much may depend on vaccine confidence. It will also be more supportive of a bigger stimulus program, although whether I can get such a measure passed may yet depend on the run-off in Georgia for the final two Senate seats.

Latest research suggests that likely U.S. vaccine take-up may be only around 50% as worries about speed of vaccine approval, and corresponding safety concerns, coupled with what to this observer seem to be strongly held, but totally ridiculous, conspiracy theories, fanned by social media, abound.  The anti-vaxxers could thus derail any hopes of a quick end to the pandemic if these figures on vaccine acceptance prove to be anywhere near accurate.

Add to this all the other uncertainties that may develop in the new year.  Doubts regarding Biden’s health and cognizance are bound to be spread by Trump-friendly social media outlets as well as scare stories about controversial Vice President-elect Kamala Harris.  Gender and race issues remain high in some sectors of the U.S. populace, and it will take more generations to erase these from the psyche, If then.  Progress in domestic economic recovery will almost certainly be slower than the optimists, and some well-followed commentators, have been suggesting.  Adverse effects of the pandemica on the U.S. economy will thus likely continue throughout 2021 and probably beyond.

Overseas issues and how to deal with them are bound to throw up some new flashpoints – in both trade and military terms.  How Biden deals with Iran, China and North Korea, as well as with Russia and many other countries, will be key here.  Expect both positive and negative developments with respect to U.S. foreign policy, with some influencing precious metals prices one way or the other.

Overall, we are predicting a positive year for precious metals, given the uncertainty that will continue to reign.  However, I would be loath to make any price predictions for a full year ahead, but will have a stab at what I foresee for prices as at June 30th.  As always, my predictions are fairly conservative when compared with some well-followed commentators who are still forecasting sky-high gains, while others see prices falling.  As usual, those whose forecasts come close will make great capital about their “accurate” predictions, while those who are way out will quietly forget theirs!

Gold:  $2,150 – This is around a 15% increase from where it is as I write, and it may be a tall order for such a hike to be achieved in a little over six months.  Gold tends to do better in times of uncertainty and, as pointed out earlier in this article, 2021 looks like it will be a hugely uncertain year for precious metals and equities.  If the latter start to look weak, as I feel they should, gold’s safe haven reputation may become more evident and attract additional investment.

Silver: $31 – Suggesting the gold:silver ratio comes down to about 70.  This sees silver doing rather better than gold, as it is wont to do in a rising precious metals market.  It may, however, have lost some of its investment luster, which it has not yet managed to regain.  Some observers see it as the real high-flying precious metal in the months and years ahead.  I am not so sure on this, but could change my views as 2021 progresses. However, most silver demand nowadays is industrial, and thus, the metal price should be more economic growth-related.

Platinum: $1,250 –  Fundamentals seem to be improving.  Production disruption in South Africa or Zimbabwe could push prices higher, but supply and demand seem to be coming back towards balance, despite a substantial supply deficit, resulting largely from supply interruptions, having become apparent in the current year.  Historically, platinum has been a more expensive metal than gold and substantially more so than palladium.  I do see some of this balance being redressed, but it may yet take several years before platinum reverts to its top price position among the major precious metals, if then.

Palladium: $2,340 – Only a small increase here.  Fundamentals remain positive, but price progress could be dented should Biden clamp down on fossil fuels and impose bans or cutbacks on the production and sale of internal combustion engine driven light vehicles, as many countries in Europe are already doing.  Longer term, as electric vehicles come to dominate the light car sector, palladium’s future looks bleak, although it may well have several years of high demand ahead before this shift in market supply starts to impact demand.

How far gold and precious metals prices progress may depend, to an extent, on U.S. equities markets.  I have been continually surprised by the strength of these markets so far this year, in light of the huge hits on large sectors of the economy caused by the virus pandemic.  However, investors have remained optimistic – in my view, overly so.  Tech stocks have done particularly well as we move more and more towards a virtual economy, but the disastrous effects on the hospitality, retail and travel sectors, in particular, which form a huge part of the U.S. economy, seem to be being glossed over by the investment community.  There still remains the distinct possibility of an equities crash, which could even bring the high-flying tech sector – which is showing signs of being over-valued, anyway – down, as well.  All investment relies heavily on sentiment and it might not take much for the currently optimistic pattern to be reversed.

Assuming my price forecasts are anywhere near correct, gold and silver mining stocks – at least as far as the larger, more diversified companies and their associated royalty and streaming companies are concerned - should, conversely, be particularly good investment bets.  They are all hugely profitable, even at current metal prices, so should be doubly so as the prices for the metals they produce – or receive royalties or metal streams for – continue to increase.  Most are dividend payers, too, which provides an extra bonus for investors – and these dividends are rising, along with earnings.

The latest Fed meeting did little more than confirm the lingering downturn in the U.S. economy. Although it did see some kind of recovery ahead, perhaps vaccine related.  The Fed confirmed it will be keeping interest rates at low levels for the next couple of years, too.Low, and effectively negative, interest rates are another positive for gold and silver, in particular.

Given that the virus incidence and associated deaths will likely get worse before they even begin to get better, coupled with the fact that relaxations over the Thanksgiving holiday are just starting to impact the figures – not to mention that Christmas, Hannukah and New Year’s are still to come - I think the Fed assessment was made somewhat through rose-tinted spectacles.  Thus, we may be due for a torrid time in at least the first half of 2021, with little sign of a virus incidence downturn and corresponding uptick in pressure on equities. This combination, however, may perhaps be positive for precious metals, which already seem to be making something of a recovery from their recent lows amidst some pretty horrendous virus deaths figures. As the reality of the problem sinks in, the markets will likely move accordingly.

The dollar index has been falling, too, which is another positive for gold and silver.  Indeed, Bitcoin, too, is soaring in price, suggesting a continuing flight out of the dollar (although, I have always looked upon Bitcoin with a dubious eye as, in my mind, it has all the attributes of a Ponzi scheme).  As long as people keep buying it, it will rise, but if it falls out of favor again, as I think is inevitable, it will come crashing down.  It is an investment built on sand, without any backing or substance, in my opinion.

The above are my personal views.  I consider myself cautiously bullish on precious metals, but certainly not one of the headline-grabbing mega-bulls who publicize their views so effectively.  There are plenty of those out there, but I tend to class their predictions in a similar vein to my take on all the conspiracy theories that seem to be an integral part of the American psyche nowadays - best ignored, in favor of more realistic commentary and opinion.