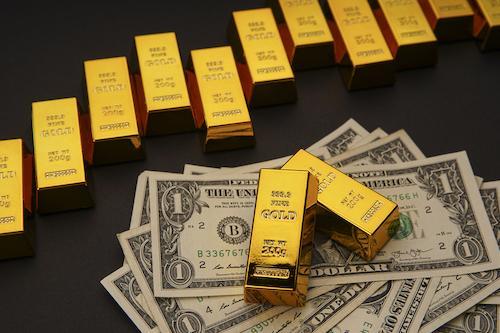 “Gold on steroids” was how some precious metals commentators described the phenomenon in which the silver price could be relied upon to outperform the gold price when the latter was rising. Additionally, silver tended to underperform when the gold market was falling.  Recently, however, silver has largely departed from this pretty reliable gold price-related pattern – when considering the upside, at least.   Silver is still influenced by gold price movements, despite silver no longer being used to the same extent as it had in the past in the minting of circulating coins.  In truth, this decrease has been happening for decades, but recognition thereof seems to have been coming to a head in recent months.

Silver investors have often tended to follow the Gold:Silver ratio (GSR) as a guide to where the silver price might be headed.  The GSR is calculated as the price of an ounce of gold divided by the price of an ounce of silver. It’s a calculation that shows how silver is trading relative to gold, in value terms.  Over the past 100 years or so, this ratio had remained somewhere within the extremes of around 16 and 100 – a very wide range – primarily landing between around 35 and 80. So, when the GSR hit say, 50 or below, gold was considered the better investment choice, while, at say, 65 or above, silver was seen as the better bet for capital appreciation.  However, this rule of thumb may no longer be quite as relevant, given the decline we’re seeing today in silver’s commodity market reliance.

The out-and-out silver bulls – perhaps an even more fanatical coterie than the extreme gold bulls – have always argued that the GSR will return to what they claim to be its historic level of around 16, leading to an enormous silver price boost.  But given that silver’s role in the production of circulating coinage has fallen to near zero today, we would argue that it has almost completely lost its monetary association and that any return to the 16 GSR level is illusory.  This fact should perhaps have become even more apparent when the GSR ballooned out to over 120 in March last year.  That did, in effect, prove to be a huge buying signal for silver, with the GSR subsequently coming back to the high 60s early in 2021.  But it has since drifted out to close to 80 again, which may signify declining investor interest in gold’s junior sibling.

So, although there has been gold price weakness recently, the silver price has been underperforming gold percentagewise over the past month or so by rather more than we would have anticipated in historic terms.  It is thus interesting to look at the calculated silver price forecast from what is usually a conservative precious metals consultancy’s point of view - Canada’s Murenbeeld & Co. We will note, however, that the analyst who gives the consultancy its name, Dr. Martin Murenbeeld, does not tend to cover the silver market himself.  Dr. Murenbeeld leaves this topic primarily to his colleague, Chantelle Schieven, to cover, who, in consultation with Dr. Tom Brady, authors the so far monthly Silver Monitor under the banner of the consultancy’s parent company, Capitalight Research.  This complements the weekly Gold Monitor newsletter headlined by Martin Murenbeeld himself,  and written in association with Schieven, which I consider to be one of the most worthwhile, regularly published global gold market analyses available.

The Silver Monitor forecast follows the well-established Murenbeeld pattern for gold price forecasting by considering three scenarios – a bearish one looking at potential downsides, one deemed to be the most likely scenario, and a bullish one.  It gives each scenario a likelihood weighting and then comes up with a probability-weighted quarterly average.  Their latest calculations for the average silver price, quarter by quarter up until Q1 2023, are set out below:

Silver bulls and investors will likely wish to contemplate that Scenario A – the bearish one – is perhaps unduly pessimistic.  In their calculations on this scenario, the analysts factor in a stronger U.S. dollar, weak economic growth, rising real interest rates, and slowing monetary and fiscal stimulus.

The consultancy notes that the silver price has been on a downward trend ever since the Fed’s June 16th FOMC meeting. The market, though, has been very focused on when the Fed might start reducing asset purchases and commence raising interest rates. The disruption, which is due to Covid-19, will continue to weigh on economic activity for quite some time, although the virus’s infection rate does, at last, seem to be slowing again (the mortality rate, however, remains disturbing). Government and Corporate debt added during the pandemic, though, is probably keeping the Fed on hold longer than it would have previously waited to make moves.  The overhang of the current Congressional debt ceiling impasse is muddying the waters somewhat and could yet delay any decisive action by the Fed on bond purchase tapering, as well as impact the timing of any Federal Fund interest rate rises, if there is no rapid conclusion to the problem.

According to the Murenbeeld consultancy, its assessed Scenario B (and also the probability-weighted average) factors in continued headwinds for the silver price over the next two quarters.  Thereafter, it presumes that the metal price resumes rising, on the likelihood of increased investment and consumer and industrial demand, as the U.S. economy makes a continued gradual recovery. This scenario also factors in low (and probably negative) real yields, as price inflation is currently higher than during pre-COVID times and shows little sign of coming down.  This Scenario B is deemed positive for the gold price and assumes silver would rise, too, by its continued association with the yellow metal.  Central banks, including the Fed, will likely keep official rates very low for the next couple of years to support economic growth. Scenario B also factors in a firmer U.S. dollar over the next few quarters.

The consultancy goes on to make its case for the perhaps over-bullish Scenario C calculation, which assumes even higher inflation, lower real-interest rates, and a weakening U.S. dollar.  It is, along with the bearish Scenario A, only given a 20% probability weighting, meaning that Scenario B comes out closest to the probability-weighted average, as it is designed to do (but the probability-weighted calculation works out slightly more bullish than this, overall, when all the weightings are applied).  Even so, the silver price is seen as unlikely to get back to the $30 level average – the target level for many commentators – until at least late next year.  Only the bullish Scenario C will likely keep the silver optimists at least vaguely happy, given much higher price forecasts are being put out by some commentators.

Silver does, however, seem to have lost a substantial part of its investment following, despite it being talked up by numerous pundits.  In part, this loss in investor interest may well have been due to the failure, at least so far, of the social media-inspired short squeeze on silver, which effectively targeted the big, mostly bank-driven, silver short positions held in the futures markets.  This #SilverSqueeze potentially resulted in many new investors losing money on what had been sold to them as a “sure thing.” Possibly adding to the #SilverSqueeze’s allure, it followed the well-publicized successes of similar endeavors in the equities market. But, as some of these investors probably learned, metals futures markets do not necessarily follow a similar path as equities.

The Silver Monitor price forecast could thus be described as very conservatively bullish overall, in that it does at least see the silver price rising, but almost certainly not as far, nor as fast, as the silver bulls would like to contemplate.  To a greater or lesser extent, this writer would concur with the Silver Monitor’s forecasts.  One should bear in mind that these forecasts are for quarterly average prices, which, because of the nature of averages, do not rule out occasional price forays well above, or below, the indicated price levels.  However, whether these predicted prices are achievable will remain dependent, for now, on the progress of the somewhat turbulent U.S. economy, which is the principal global price driver for precious metals.