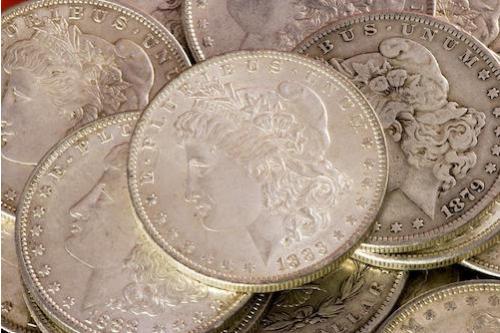 No American coin has ever conjured up the image of the Old West more than The Morgan Silver Dollar.

This single coin is considered to be one of the most valuable and collectible U.S. coins to ever be minted. Remaining specimens of this coin continue to draw monumental prices when they do come up for sale; their popularity has grown into legendary proportions.

Tales from the West abound and keep the mysticism surrounding the coin alive. Designed by George T. Morgan this silver dollar was created from the enormous silver lodes that had been discovered in Nevada. While the first ones were minted at the Carson City Mint from 1878 to 1893, others were minted in Denver in 1924 and in New Orleans from 1879-1904. Both Philadelphia and San Francisco minted the coins throughout its history.

The Morgan Silver Dollar is considered by most collectors to be true work of art and the best of the many designs created by George T. Morgan. On the obverse side, Lady Liberty's head fills the bulk of the face and is surrounded by the date, 13 stars and the phrase E Pluribus Unum, which is Latin for "Out of Many, One."

On the back of the coin the bald eagle is perched on a branch and clasps arrows in one of its talons. Its wings are spread wide and the whole image is surrounded in part by a wreath. The motto "In God We Trust" sits above the eagle's head. Around the rim of the reverse side are the words One Dollar and United States of America. The words One Dollar have a start on either side and the mint mark, if there is one, sits below the wreath.

While this is the basic design, there were literally hundreds of variations. These include the seven and eight tail feather versions. This tremendous variety keeps collectors very busy trying to add one to their collection that they do not already have. Over the years these coins have turned in huge collections like the Redfield hoard. But in the late 60s, the Treasury found almost 3 million of these silver dollars that had never been circulated, they were eventually sold off by the GSA and became known as GSA Morgan Dollars. The sheer beauty of their design and overall rarity make them one of the most collectible coins to ever be produced in U.S.


How Much Silver is In A Morgan Dollar?


These coins are 90% silver. They are the reason that many people who collect them consider the coins to be an investment asset. The history of this coin is in itself fascinating enough to give them value, but in order to really understand them, we need to cover some details that go deeper into how these coins are valued.

Those who are thinking about buying silver coins should really do their research. The grade of the coin will determine much of its value. In order to do this, you can either buy the Red Book, which functions as a guide book to the coins of the United States or use a reputable online site which contains coin values.


The Morgan dollar is generally considered to be an affordable choice among silver coins available today, but it is exceptionally important that you understand coin grading and how value is assigned in the case of this particular coin. In general, the Morgan dollars minted in Carson City, Nevada are going to be the most valuable.

What makes these particular silver coins so fascinating is that the vast bulk of them was never circulated. That's right; most of those buying silver coins of this type today are purchasing uncirculated coins that have been stored in vaults for many years.


During the first run of production of these coins between 1878 and 1904, there were more than 500 million produced so they are in no way rare, even though they can be quite beautiful. Nearly 75% of those 500 million coins were melted down over the years.

The coins that did not get melted down never left the Mint before 1960. Because of this, these coins are really only worth their weight in silver bullion.

Unscrupulous sellers of coins will often try to get anywhere from $300 to over $600 for these uncirculated coins, but this would be an incredibly bad purchase decision. The truth is, around half of Morgan dollars out there today are worth only 10% of those values.

Again, this shows the importance of doing your research so that you are not ripped off by sellers with bad intentions or who may be purely ignorant of the Morgan dollar's history. You want coins whose values start at MS-65; these are going to be the most valuable, particularly since we live in an era where they can be preserved more easily.

The bottom line when you purchase a Morgan dollar is that you are looking first for a dealer you can trust. Finding a reputable dealer is usually easier for people who turn to individuals belonging to the PNG or Professional Numismatists Guild. You need to know that your dealer has a solid track record and will stick to ethical standards in their sales so that you do not overpay for the coin in question.

Always remember that how you store Morgan dollars or any other precious metal coins for that matter makes a difference. If you do not have a built-in safe in your home, then consider using a safe deposit box at your local bank. Morgan dollars certainly hold the potential to be a serious investment and you want them to remain in good condition.