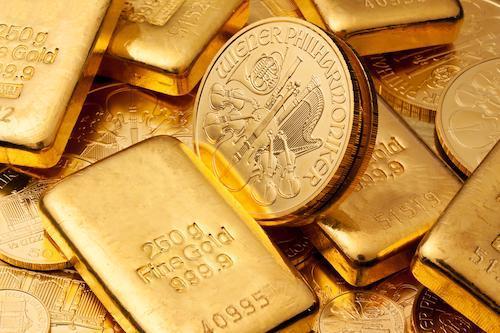 Gold could be seen to be caught between two stools, with respect to inflation.  The yellow metal is generally seen as an inflation hedge and wealth protector but increasing inflation may be counteracted by a relevant central bank, if it were to raise interest rates – and higher interest rates are seen as a negative for gold.  However, if interest rates continue to be lower than the inflation rate, they are seen as effectively negative, which are, conversely, gold positive.

The situation in the U.S., where the global gold price tends to be defined and set - even though gold consumption may actually be far higher in other parts of the world - is a great example of how the interest rate perception is actually impacting the gold price.  There is a current argument that U.S. inflation may be on the rise, perhaps significantly.  Analysts draw on producer price data and factory input prices to come to this conclusion, although the nation has consistently undershot the target inflation rate of 2% of the country’s central bank (the U.S. Federal Reserve – the Fed).  Now inflation seems to be coming under pressure, as some economic progress is being made, although the Fed itself professes no real worries that its target rate may be exceeded.  Indeed, the Fed would probably welcome an uptick in the inflation rate, in the interest of the rate averaging 2% over a period of time, which would only be achievable if a higher than 2% rate should occur over a relatively limited duration.

Argument abounds over how high the Fed might allow inflation to increase before implementing any interest rate raises to try and bring inflation back to its overall target level. But for the moment, it is prioritizing getting unemployment down and is less worried about inflation as a consequence – a position it has made clear in several recent statements. It remains unclear, however, how far the Fed might let inflation rise before taking measures to try and bring it back down.

Highly rated analyst, Grant Williams, in his latest Things that make you go hmm.. newsletter entitled, “Amen Corner,”  ponders on the state of the U.S. and global economies.  According to the newsletter, this followed on from his thoughts formulated while at the U.S. Masters golf tournament, likening the dilemma faced by commentators to that of the golfers facing the Augusta National’s iconic three-hole stretch.  He sets out in detail both sides of the rising inflation argument in his usual informative and humorous approach.  At the end, he probably comes down on the side of the rising inflation predictors – but only just – despite the Fed’s unwavering assertion that excessive inflation is not a foreseeable problem in the next couple of years.

Markets have been taking a predictably more sanguine approach, with perhaps the “inflationistas” gaining slight preference.  Hence the pullback from the high $1,770s achieved at one time this past week.  Thus, the opinion so expressed, which seems to have gained the upper hand at the moment, is that the Fed, despite its denials, may be forced into raising interest rates sooner rather than later to combat what the market sees as an out-of-control inflation advance of 4% or above.

In the past, the Fed raising interest rates has tended to be a negative for the gold price, as it tends to lead to a stronger dollar.  But then, a stronger dollar tends not to be in the interests of U.S. export markets, nor the current account balance, which is already at near horrific levels. This discord may force the Fed to take opposite measures and force the dollar downwards, which may be one of the reasons for its avowed reluctance to raise interest rates for the foreseeable future.  A zero or even negative interest rate policy may even be in the Fed’s deliberations.

Gold thus looks as though it may be in a relatively strong position.  Equity indexes are looking vulnerable to potential ongoing falls, while Saturday’s trade in Bitcoin, which saw it fall around 15% in an hour, serves to demonstrate that particular asset’s potential volatility and vulnerability.  Bitcoin seems to have halted its reverse for now, but it probably wouldn’t take much to see it crashing down again.  It may be a favorite on social media and among certain charismatic, much followed individuals, but this writer sees it as lacking substance, and thereby, vulnerable, should the market move against it.  It only seems to have achieved its current heights on a wing and a prayer.  However, it has defied my expectations in the past, and it may do so again, but I remain extremely wary, and caution others to be so, too!