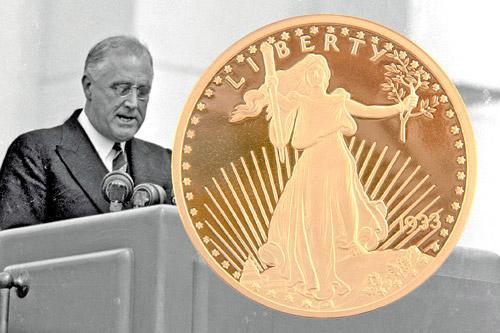 Amidst the Great Depression, the United States government decided to remove itself from the gold standard. Many individuals and foreign governments had started converting their currency to gold, which restricted the American supply of circulated currency. So, on April 5, 1933, President Franklin Roosevelt signed Executive Order 6102. This forbade “the Hoarding of Gold Coin, Gold Bullion, and Gold Certificates” by American citizens.


Did Roosevelt Confiscate All Gold?


US citizens were given until May 1 of 1933 to turn in their gold. In exchange, they would be compensated $20.67 per ounce. The penalties for refusing to turn in gold were set by an amendment of the Trading with the Enemy Act of 1917 and were set as a fine of up to $10,000 and/or a prison sentence of up to ten years.

Some gold, however, was exempt from the order. If gold was used in art or through a profession then possession was legal. This covered such people as artists and jewelers—even dentists. Additionally, each person was allowed to maintain gold coins so long as the value didn’t exceed $100.


The Aftermath of Executive Order 6102


Afterward, the US government changed the price of gold for foreign governments to $35 an ounce. Since the US government had given citizens $20.67 for their gold, this created a profit was used to create the Exchange Stabilization Fund, an emergency reserve fund.

Although the penalties for hanging on to gold were steep, only one person was ever prosecuted. Frederick Barber Campbell was charged with hoarding gold but had his conviction overturned when the judge ruled that the order was not valid, as it was under the signature of the President and not the Secretary of the Treasury. In turn, the US government issued a new order under the signature of the Secretary.


In 1934, the Executive Order was followed by the Gold Reserve Act. This maintained the illegality of US citizens owning private gold except for those amounts and type exempted and created the Exchange Stabilization Fund.