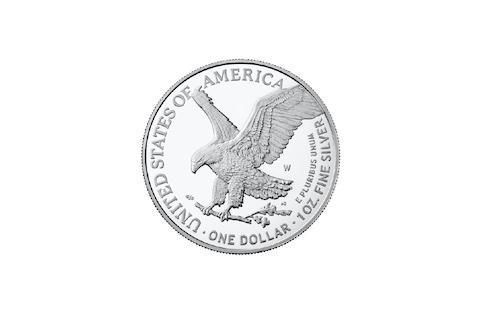 With continuted struggles of economies and disrupted supply chains the United States Mint is officially launched its 2022 Silver American Eagle Proof coin on April 14th, 2022, at noon Eastern Time. Selling out of their mintage limit within minutes.

This long-anticipated 2022 Silver Eagle Proof issue will mark the second time in the Silver American Eagle series’ now-35-year history a new reverse design will be featured. The original reverse imagery was created by John Mercanti – who joined the U.S. Mint in 1974 as a sculptor-engraver and would later become the 12th Chief Engraver of the organization, a role in which he served until his retirement in 2010 – for the program’s 1986 inaugural release.

While Mercanti’s “heraldic eagle” reverse image has become arguably one of the most recognizable coin designs in U.S. numismatic history and remains much beloved by coin investors across the globe, the program’s new “tails” side design is already ginning up much buzz and fanfare in the precious metals sphere. The new design, which we explore in more detail below, was created by Emily Damstra, a multi-year member of the U.S. Mint’s Artistic Infusion Program and professional illustrator. She has created several motifs for coins from both the U.S. and Royal Canadian mints and a few postage stamps for the United Nations Postal Administration.

In addition to its brand-new reverse design, the 2022 Silver American Eagle Proof coin will feature an enhanced obverse motif, which will include additional design elements and other technologically supported artistic improvements.

The 2022 Silver American Eagle Proof will not be subject to a mintage limit but will have a product limit of 300,000 and an order limit of three coins per household. Michael White, a spokesman for the U.S. Mint, clarifies, a mintage limit represents "the number of coins that were produced." In contrast, "Product Limit is the number of units produced for an individual product or SKU,” with a “SKU” being a product’s numeric identifier.

Shortly following the launch from the U.S. Mint, clients of Wholesale Coins Direct will have the opportunity to add this historical 2022 Silver Eagle Proof coin to their asset portfolios. Wholesale Coins Direct is proud to offer clients an investment coin inventory made up almost exclusively of precious metals pieces graded at the highest PF70 level, as deemed by the leading precious metals certifier, the Numismatic Guaranty Corporation (NGC).

Adding even more allure to these esteemed items, each Proof 70 investment coin purchased through Wholesale Coins Direct is accompanied by a certification label hand-signed by former Mint Director Ed Moy. This exclusive value-add has grabbed headlines and garnered attention from across the precious metals sector since first being offered in the summer of 2016. Ed Moy labels have been known to bolster coin values and provide investors with a unique investment edge and opportunity to protect their hard-earned wealth while hedging against economic turbulence over the long term.

After more than three decades in existence, the globally recognized and widely revered Silver American Eagle coin will, for the first time, feature a brand-new reverse design motif via its summer 2022 release. This updated back-side look will be mirrored by a refreshed and enhanced version of the same obverse image that’s been featured on the front side of the coin for the program’s entire 35-year run.

The new reverse motif, designed by illustrator and U.S. Mint Artistic Infusion Program member Emily Damstra, and sculpted by now-retired Mint sculptor-engraver Michael Gaudioso, features a strikingly dynamic image of an American eagle gracefully descending upon what is presumed to be a nest below. The mighty bird clutches an oak branch in its talons, wings outstretched elegantly to either side, and is encircled by the words “UNITED STATES OF AMERICA,” the coin’s “ONE DOLLAR” face value, and its “1 OZ. FINE SILVER” contents. The motto found on the Seal of the United States, “E PLURIBUS UNUM” – which means, “Out of many, one” – is inscribed on the coin’s surface to the right of the eagle, along with both the designer’s and sculptor’s initials on either side of the bird. The “W” mint mark, indicating production at the West Point Mint in New York state, appears just above the bird’s tail feathers.

The revamping of the Silver American Eagle’s reverse image was approved in 2019 by then-Treasury Secretary Stephen Mnuchin, following U.S. Mint Director David J. Ryder’s pursuit of the matter. After Secretary Mnuchin approved the updated design request, artists at the U.S. Mint developed a suite of 39 designs to be considered and selected from by the Citizens Coinage Advisory Committee (CCAC) and the Commission of Fine Arts (CFA). While the two organizations nominated different images for the back of the Silver Eagle, Secretary Mnuchin ultimately selected Damstra’s in-flight eagle to grace the coin's reverse side beginning in 2021.

While the updated Silver American Eagle’s obverse side will continue to feature Adolph A. Weinman’s classic Walking Liberty design, the Mint has noted in its description of the 2022 release that, “[t]hanks to technological advancements in the design and minting process, Liberty now encompasses some of Weinman’s original details that were not previously possible.” The Mint further elaborates that it “returned to its original historical assets to render a closer reflection of Weinman’s original vision.” Specifically, according to a subscriber email sent by the Mint just before the launch, this "closer reflection" of the artist's "original vision" includes the cap Liberty wears along with her left eye being returned to the original appearance intended for the design's sculpted manifestation, the drapery of the American flag Liberty wears being “restored,” the shape of the sun’s rays cresting over the horizon being “restored,” and the fact that the font for the coin’s strike year of “2022” “emulates” the font used on the coin in 1916. The 2022  issue also includes the artist’s “traditional mark,” which is a small symbol composed of an intertwined “A” and “W” – Weinman’s initials. The mark appears in the lower right-side area of the coin’s obverse, just below the “IN GOD WE TRUST” inscription.

The Mint also notes that the revamped Silver Eagle features enhanced security details, such as "anti-counterfeit reeded edge variation," designed to combat the growing counterfeit initiatives. According to the same email sent just before the coin's launch, the Mint "benchmarked its efforts against anti-counterfeiting programs implemented by other major world mints" and state that the added advanced security features "will make these remarkable coins more difficult to counterfeit."

The 2022 Silver American Eagle Proof coin will be produced to the same specifications as in years past. These details include a $1 legal tender face value, precious metals contents of one troy ounce of 99.9% fine silver, and a 1.6-inch diameter.

With the commencement of this new design chapter in the Silver American Eagle series’ legacy, we thought it an apt time to dive into the history of the coin program, which has developed into one of the most recognizable and celebrated suites of precious metals investment pieces offered by the modern U.S. Mint.

The driving force behind the establishment of the Silver American Eagle coin program ultimately stems from (largely unsuccessful) initiatives by several presidential administrations throughout the 1970s and early 1980s to sell off silver reserves from the United States’ Defense National Stockpile.

While those spearheading the sell-off endeavors of this era argued that production of silver in the United States far outpaced the country’s strategic needs for the metal, the stockpile depletion efforts were derailed by various special interest and political groups. Such groups included silver mining proponents in states that depended upon that industry, as well as pro-military senators and representatives who wanted assurance that proceeds from any such sale of national silver supplies would be used to fund material and other purchases for the Defense National Stockpile versus simply selling the holdings to reduce the federal deficit.

Several years of starts and stops for the silver sell-off ensued, with the executive and legislative branches sparring back and forth on the best way to go about such an endeavor – if at all. Numerous attempts were made in Congress to address the issues at hand – often spearheaded by Senator James A. McClure of Idaho – many of which were met with non-action or outright rejection by various committees and the legislative bodies at large.

Finally, in 1985, Senator McClure proposed an amendment to H.R. 47 – the “Statue of Liberty-Ellis Island Commemorative Coin Act” – that finally took hold. The amendment would essentially authorize the Treasury Secretary to mint and issue silver bullion coins, and purchase silver from the nation’s stockpile to do so. The proposed amendment would also mandate other details about the newly conceived coins that would be authorized by the legislation, such as diameter, weight, metal fineness, design features, and other items.

The amendment – which would come to be dubbed the “Liberty Coin Act” – was passed by the Senate via voice vote on June 21, 1985 – the same day it was introduced – followed by approval in the House three days later. On July 9, 1985, President Ronald Reagan signed the amended bill into law, officially paving the way for the soon-to-be wildly successful Silver American Eagle coin program.

By the year 2002, less than 20 years after the program’s authorization, it was clear that the silver supply from the Defense National Stockpile used to create the Silver American Eagle coins would soon be depleted, creating the need for further legislation to be passed in order for the coin program to continue. Such legislation was introduced in early June 2002 by Senator Harry Reid of Nevada. The bill was passed by both houses of Congress only a few weeks after its introduction and was signed into law by President George W. Bush on July 23, 2002. The bill was dubbed the “Support of American Eagle Silver Bullion Program Act.”

Mintage of the Silver American Eagle Proof coin began in 1986 at the San Francisco Mint, where it was produced through 1992. These "San Francisco Mint Series" coins all bear the beloved "S" mint mark, which today enjoys a near cult-like affinity from investors and coin enthusiasts across the globe.

Beginning in 1993 and lasting through the year 2000, Silver American Eagle Proof coins were struck at the Philadelphia Mint and bear the “P” mint mark. In 2001, production of the Silver Eagle Proofs began at the West Point Mint, where they are still struck today. The one exception during this “West Point Mint Series” run has been in 2009, during which no proof versions of the coin were minted.

Not only has the Silver American Eagle series at large grown into one of the most successful coin programs offered by the modern U.S. Mint, but many individual strikes issued over the years have also earned status as investor favorites in their own rights.

The Silver American Eagle program boasts a storied history and enduring reputation as one of the most alluring coin series available to precious metals investors seeking an accessible and reliable way to protect their hard-earned wealth for years to come. The introduction of this second design chapter in the program’s legacy is yet another reason to love the Silver American Eagle coin!