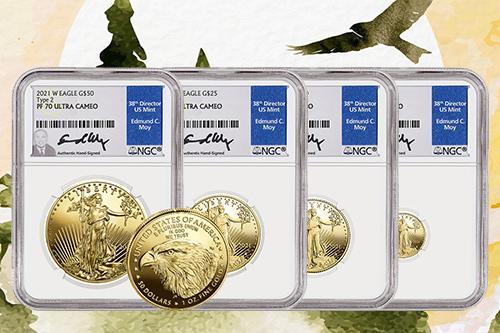 After nearly a year and a half of anticipation, the newly designed 2021 Gold American Eagle Proof coin has finally arrived!

The release of this Type 2 Gold Eagle Proof will mark the first time in the coin program’s three-and-a-half-decade tenure that the Gold American Eagle will feature a revamped reverse design mirrored by an enhanced iteration of its original obverse design.

The new reverse image, which we explore in more detail later in this article, was created by U.S. Mint Artistic Infusion Program artist Jennie Norris and befittingly also marks the first time the artist herself has had a design featured on a coin from the United States Mint. The sculpting for the 2021 Gold Eagle Type 2 reverse motif was done by Renata Gordon, a veteran U.S. Mint sculptor-engraver since 2010.

Clients of Wholesale Coins Direct will have the opportunity to add one (or all four!) of these historic 2021 Gold American Eagle Type 2 Proof coins to their asset portfolios shortly following the Mint’s July 29th release. Unlike coins purchased directly from the Mint, investment pieces obtained through the Wholesale Coins Direct are accompanied by an authenticated quality score – known as a “grade” – as granted by leading industry grading authority, the Numismatic Guaranty Corporation (NGC). Additionally, Wholesale Coins Direct investment pieces graded at the highest PF70 level are accompanied by a certification label hand-signed by former U.S. Mint Director Edmund C. Moy. The highly sought-after Ed Moy label is a unique value-add offered exclusively to the Wholesale Coins Direct clients that has gained notoriety across the investment sector and have been known to bolster coin values for those pieces that bear the label.

Since its launch in 1986, the Gold American Eagle Proof coin has featured the “Family of Eagles” motif designed by Miley Busiek Frost and sculpted by Sherl J. Winter on its reverse side. The 2021 Type 2 issue will mark the first time in the program's 35-year history that the coin will undergo a design transition.

The new reverse design, created by U.S. Mint Artistic Infusion Program member Jennie Norris, is a striking close-up portrait of an American eagle – a starkly different take on the eagle concept than Busiek’s familial scene. To inspire her concept, Norris drew on her experience as a volunteer raptor handler and her “deep connection with wildlife,” the Mint noted in a press release on the forthcoming motif overhauls. The artist elaborated, remarking that, “The American Eagle is such a noble bird. I was hoping to capture the intensity of his stare through the close cropping. His gaze speaks of pride and wisdom passed down through generations of time.”

While Norris’s eagle image is not depicted with such overt movement as Busiek’s design, which showed an in-flight eagle and two other eagles huddled together in a nest below, this second motif is somehow still quite dynamic. The captivating gaze of the mighty bird does indeed leave the viewer with the impression of a living, breathing creature, thanks to the design’s impressive and life-like detail.

The new eagle portrait is surrounded by the standard Gold American Eagle reverse inscriptions – "UNITED STATES OF AMERICA" to the top, mirrored by the coin’s face value and weight and finesse of its gold contents to the bottom (specific to each of the four individual denominations). A set of three five-point stars appear on both the right and left edges of the coin’s reverse design, separating the inscriptions seen along the top and bottom. Above the bird’s head appear the motto of the Seal of the United States, “E PLURIBUS UNUM” – meaning, “Out of many, one” – and the nation’s motto, “IN GOD WE TRUST,” inscribed on two lines. The designer’s initials appear under the eagle’s neck, while the sculptor’s initials appear just above.

The coin's obverse will continue to bear a replica of Augustus Saint-Gaudens’ full-length depiction of Lady Liberty that first appeared on the U.S. $20 gold double eagle coin in 1907. The image shows a dynamic image of Liberty walking forward in full stride, hair and dress billowing behind her in the wind. She holds a torch high into the air with her right hand and grasps an olive branch in her left hand. The U.S. Capitol building appears in the distance behind her while a beaming sun rises over the horizon. While the general image remains unchanged for the 2021 Type 2 release, the Mint notes in its product description that the team “returned to its original historical assets in 2020 to render a closer reflection of Saint-Gaudens’ original vision and detail,” elaborating that “[l]egacy details have been restored for the obverse design to include modifications to the Capitol Building, stars, torch, sun rays, and other design elements based on the original bronze cast.” More specifically, the Mint points out that Liberty’s eyes are now more subtle on the 2021 Type 2 issue and enhanced with a “stronger effect,” the shape of the sun’s rays in the background are “restored,” Saint-Gaudens’ initials are included, and the olive branch motif is “restored.”

In addition to these obverse enhancements, the Mint further notes that the one-ounce issue of the 2021 Gold American Eagle Type 2 Proof coin will feature a reeded edge variation for anti-counterfeiting purposes.

Like the , the Gold American Eagle series launched for the first time in 1986. However, the Gold Eagle was authorized not by the same piece of legislation that paved the way for the production of the Silver Eagles – the "Liberty Coin Act" that amended the "Statue of Liberty-Ellis Island Commemorative Coin Act" – but rather, by an act known as the Gold Bullion Act of 1985. In addition to mandating certain requirements and specifications for each Gold American Eagle produced under the banner of the program, the Gold Bullion Act of 1985 requires each coin in the Gold Eagle series to be struck of gold mined in the United States, making it a truly American coin!

The establishment of the Gold American Eagle coin program allowed the United States to compete on the global 22-karat gold coin stage, which had reached a fever pitch by the late 20th century. However, this lucrative market was dominated at the time by non-U.S. investor favorites like the Canadian Gold Maple Leaf and the South African Krugerrand coins.

The launch of the Gold American Eagle coin program allowed the U.S. to stake a claim in this wildly popular global gold coin market and bring investment dollars back to its shores. In addition to allowing for the creation of the Gold American Eagle coin program, the Gold Bullion Act of 1985 calls for Gold Eagle coins to be comprised of an alloy of 91.67% gold, 3% silver, and copper to balance. This 22-karat gold alloy composition is also an English standard known as "crown gold." Mixing the small amounts of silver and copper with the gold results in precious metals products that are more durable and typically more resistant to evidence of wear and tear than purer and therefore softer gold pieces. In 1834, the United States stopped using the "crown gold" alloy for its currency pieces, a pause that would remain in effect for the next 150 years until 1986, when the Gold American Eagle was launched.

The Gold American Eagle Proof coin has been struck since the American Eagle program’s inaugural run in 1986. In that first year, the Mint struck and issued only a one-ounce version of the Gold Eagle Proof that carried a legal tender – although essentially nominal – face value of $50. The following year, the Mint introduced a fractional size – a one-half ounce iteration with a $25 face value – which it issued alongside its original one-ounce version. Beginning in 1988, two years into the program’s tenure, the Mint began striking and releasing the four sizes we know today – the early one and one-half ounce sizes, plus the two new sizes: a one-fourth-ounce issue with a $10 face value, and a one-tenth-ounce issue with a $5 face value. The one exception in the program's otherwise continual production history was in 2009, when no Gold Eagle Proofs were struck, a pause that allowed the Mint to maintain focus on meeting increased gold bullion demand during the financial crisis of 2008 and 2009.

The Gold American Eagle Type 2 Proof release marks the beginning of an exciting new chapter in one of – if not the – most recognizable and celebrated coin programs offered by the modern United States Mint. The Gold American Eagle Proof has become a staple in many investment portfolios around the globe, a legacy that is sure to continue with the newly designed issues coming our way.